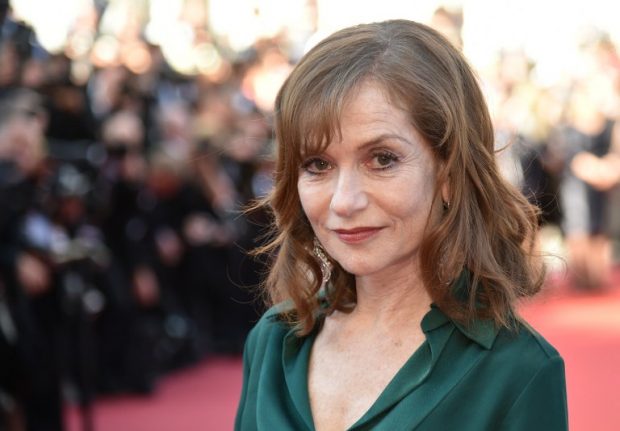 Photos: AFP
Steely and fearless, she has a history of taking on some of the toughest roles in cinema from rape victims to murderers to sado-masochists and abortionists.
Her staggering performance in “Elle”, which won both best foreign film at the Globes in Los Angeles on Sunday and her best actress, is typical of her gift for making almost unbearably dark stories not just watchable but compelling.
In it she plays a businesswoman, Michele, who is raped by a younger man only to track down him and invite him to dinner.
Just when you think you cannot bear the tension a minute more, she slowly achieves a kind of mastery over her attacker by extracting her own pleasure from him.
Director Paul Verhoeven told AFP that several top American actresses turned down the role in the subversive thriller because it strayed dangerously far from boundaries of the rape-revenge genre.
So instead he set the film in France and asked 63-year-old Huppert to play the role.
The veteran Dutch-born maker of “Basic Instinct” and “Total Recall” described Huppert as “the most fantastic actor I've ever worked with, on a level that I did not know existed”.
“I have never seen an actor or actress add so much to the movie that was not in the script.” 'The French Meryl Streep'
Verhoeven is not the only one to have been bowled over by her intelligence.
The late American writer and feminist Susan Sontag called her “a total artist” and said she had never met “an actor more intelligent, or a person more intelligent among actors”.
Huppert is often compared to Meryl Streep for her range and her mastery of both stage and screen.
But the American actress has never embraced the darker side of human nature as readily as Huppert has in such controversial classics as Michael Haneke's “The Piano Teacher”.
That searing portrayal of a masochistic Viennese music professor won her both the best actress at Cannes and the European Film Awards in 2001.
“In film there are few things that scare me,” said the mother-of-three, who began her career playing rebellious freckly teenagers in the early 1970s.
Her big breakthroughs came in the French road movie “Les Valseuses” (1972) — which also launched the career of Gerard Depardieu — and Jean-Luc Godard's
“Every Man for Himself”, where she played a prostitute.
She was still stuck in a brothel for her first big American role playing a madam in Michael Cimino's commercially disastrous “Heaven's Gate”.
But her career has been built on playing powerful women.
She has often used her almost prim upper-class exterior to contrast a boiling emotional interior — her slight frame further concealing the power within.
Icy charisma
Nor was she afraid to play the bitch for the late great French director Claude Chabrol with whom she often worked, using her icy charisma for great dark comic effect in his dissections of French bourgeois life.
Having long admired her from afar, American critics have bowed down before Huppert despite “Elle”'s slippery subject matter.
“This is one of those moments when an actress isn't just honoured but anointed — lionised for her bravura and daring,” said Owen Gleiberman of the movie bible Variety.
Her royal flush of critics' awards, with New York, Los Angeles, US national film writers all proclaiming her performance the best of the year came despite “Elle” not making it onto the Oscar shortlist of best foreign films.
Justin Chang of the Los Angeles Times called her “one of the world's greatest living actresses” while the New York Times marvelled at “her ability to convey moral complexity in the most unique ways… Huppert gives the impression of observing herself at the same time that we, the audience, are observing her.”
Verhoeven, whose career has been revived by the film after the critical catastrophe of “Showgirls”, said: “That's the beauty of it. She's discovering it as she goes, and is not afraid to feel that.
“I think there is always a mystery to her acting,” he added.
There is mystery too at how at 63 Huppert looks as beautiful as she did when she was a teenager. Asked at Cannes last year if there was a portrait hidden somewhere in an attic, she laughed off the idea, crediting her genes from her English-teacher mother and Jewish father, who survived World War II in France by hiding his roots.
Linked with the powerful French producer Daniel Toscan du Plantier early in her career, she has had three children with her Lebanese-born partner Ronald Chammah, a producer and director, who she met on the set of a Chabrol film in the early 1980s.