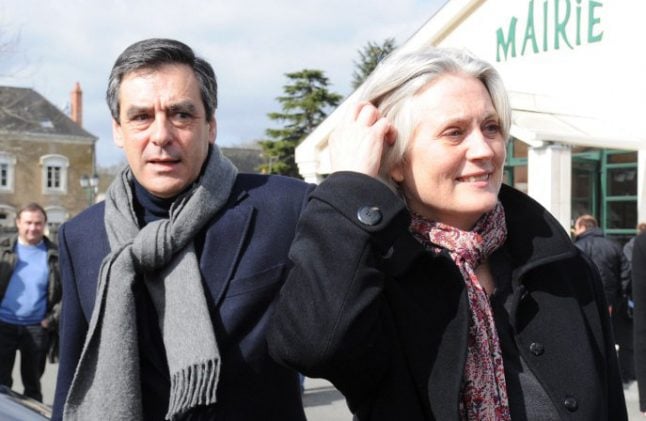 The British-born wife of French presidential candidate Francois Fillon was paid around 500,000 euros ($538,000) over ten years from parliamentary funds made available to her husband, a report said Tuesday.

The Canard Enchaine, which mixes satire with investigative reporting, detailed various periods during which Penelope Fillon was paid from money available to her husband as a longstanding MP for the central Sarthe region.

Hiring family members is not against the rules as long as the person is genuinely employed, but the newspaper said it had been unable to track down witnesses of her work.

Fillon's wife had “indeed” worked for him, said Fillon spokesman Thierry Solere, as well as at a literary magazine owned by a close friend. “It is common for the spouses of MPs to work with them,” he told AFP.

Citing pay slips, the Canard Enchaine said Penelope (nicknamed “Penny”), who has always been seen as uninvolved in her husband's political life, was paid from 1992 to 2002 from funds intended for parliamentary assistants.

From 2002, when Fillon took up a cabinet post under then president Jacques Chirac, she became an assistant to Marc Joulaud, who carried out Fillon's parliamentary duties in his place, earning between 6,900-7,900 euros per month.

A colleague of Joulaud's told the paper she “never worked with (Penelope). I have no information about this. I knew her only as a minister's wife.”

READ ALSO: The Welsh woman who might be France's first lady

The paper said that Penelope was again paid “for at least six months” in 2012 when Fillon, then prime minister, left government after the defeat of rightwing president Nicolas Sarkozy.

“In total, Penelope will have earned around 500,000 euros from parliamentary funds,” the paper said.

The paper also says that Penelope Fillon was paid around 5,000 euros a month between May 2012 and December 2013 by the periodical Revue des Deux Mondes.

The literary magazine is owned by a friend of Fillon, Marc Ladreit de Lacharriere.

Canard Enchaine quoted the director of the monthly, Michel Crepu, as saying he was shocked.

“I have never met Penelope Fillon and I have never seen her in the offices of the review,” he said.

Francois Fillon told a television interviewer in November that Penelope stayed at home in Sarthe while he worked as a lawmaker in Paris.

“I didn't have much time to see the first four (of five children) grow up because I was an MP,” he told Karine Le Marchand, the chatty presenter of “Ambition Intime” (Intimate Ambition) on the private TV channel M6.

“It was 24/7, so basically they were raised by their mother.”

But he also said, without saying which time period he is referring to: “She was very involved in the campaigns, handing out flyers and attending meetings with me.”

Fillon added that the Welsh native is no longer involved in politics at all.

A trained lawyer, Penelope told Britain's Sunday Telegraph after her husband became prime minister in 2007 that she preferred being at the couple's 12th-century chateau near Le Mans, western France, with her children and five horses than in glitzy Paris.

“I'm just a country peasant, this is not my natural habitat,” she joked.

Polls forecast that Fillon, from the rightwing Republicans party, would win presidential elections due in April and May if the vote were held today.

But many analysts see the contest as highly unpredictable with Fillon facing competition from far-right candidate Marine Le Pen, centrist Emmanuel Macron and others.