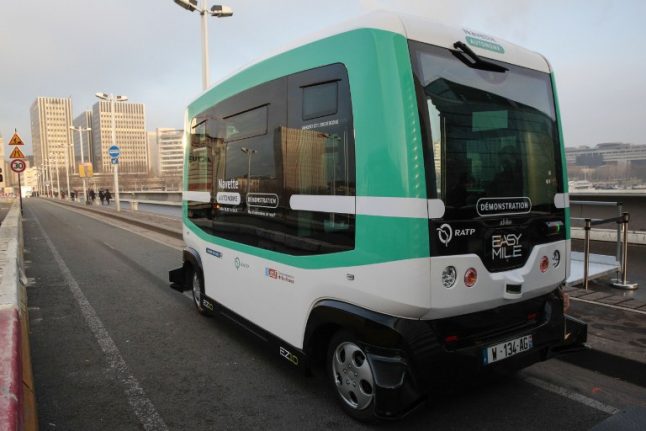 All photos: AFP
Two box-shaped electric vehicles capable of carrying around 10 people have been deployed — within the safety of a special lane — on a bridge connecting two railway stations to the east of the city centre.
“Autonomous vehicles represent a revolution for every city on the planet… which will change our urban environment and public space in a spectacular fashion over the next 20 years,” Paris deputy mayor Jean-Louis Missika told reporters.
The test unveiled Monday, which will last three months, is the first stage of the city's embrace of self-driving vehicles which use a combination of lasers and cameras to detect other objects and people around them.
Buses travelled between Gare d'Austerlitz and Gare de Lyon across the Seine River. The head of the Paris transport network, Elisabeth Borne, said she envisaged the buses being used one day to connect homes and railway stations in the suburbs, which are served by overland trains known as RERs.
“We dream one day of having buses like these parked near RER stations which would come to collect passengers on demand,” she told reporters at the launch.
The advent of self-driving vehicles poses a series of regulatory, ethical and economic questions which policymakers will have to grapple with as the technology improves and grows more widespread. One of them is: What happens to the humble bus driver?
“We need to start thinking from today about how to train drivers so they can shift into the new jobs created by autonomous vehicles,” Missika, who is a transport expert in the mayor's office, told AFP.
In October, delivery drivers got an uncomfortable glimpse of the future when a self-driving truck built by Uber's Otto unit successfully delivered a beer shipment.
Cars with some autonomous functions are already on our roads, and more than a dozen automakers including BMW, Kia, Volkswagen and General Motors are racing to get fully self-driving cars to market by 2020.