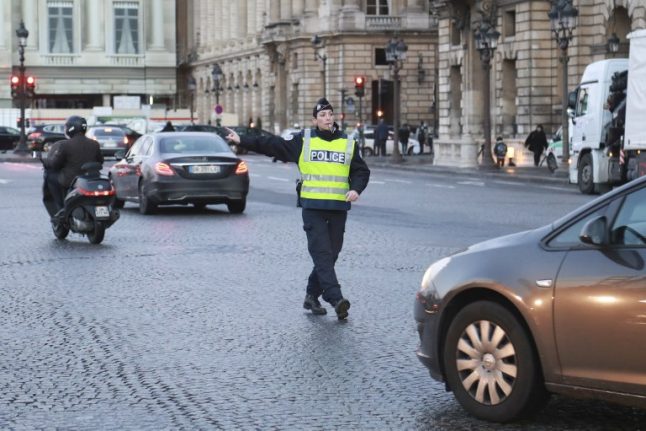 Photos: AFP
The City Hall has said that any vehicles with a “Level 5” sticker will not be allowed on Paris roads on Monday.
Level 5 vehicles are those with diesel engines from 1997 to 2000 (Euro 2), with anyone caught driving one in Paris risking a minimum fine of €22.
The ban applies for all roads inside the A86 motorway, but not the A86 itself, the second ring road around Paris.

Central France's Lyon, which is also going through a spike in pollution, rolled out traffic bans on Monday too.
From 5am on Monday, only vehicles with an even-numbered registration plate can be on the roads, unless the car has a a green Crit'Air sticker or is Level 1, 2, or 3.

READ A FULL GUIDE TO THE STICKERS HERE In Paris, authorities have urged commuters to take public transport if possible where discounted tickets are available.

In fact, Monday marks the first day the RATP transport authority uses the “pollution ticket”, which is just €3.60 for a whole day of travel, no matter where in Paris you are travelling.

The stickers are the city's latest attempt to tackle pollution and were made a legal requirement for all vehicles in Paris last week.
The stickers replace the old system, which saw cars with odd or even-numbered registration plates banned from the roads on alternate days. Authorities had also taken the measure of making all public transport free – but the system cost a reported €4 million per day.
The anti-pollution stickers have been slow to catch on, however.
Authorities have said that most drivers still haven't got their stickers (despite having had the past six months to do so), and Paris police have said they will be lenient at first with those caught driving without them.
Fines for not having a sticker start at €68 and this even includes foreign vehicles passing through the capital.
READ ALSO: Paris rolls out anti-pollution stickers for all vehicles (including foreign cars)