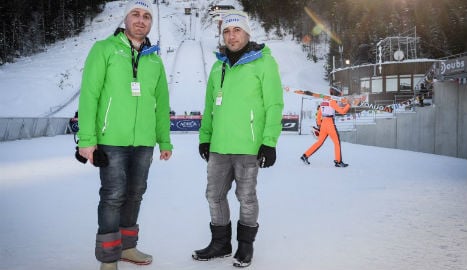 Raad and Wissam Hadaya working in Chaux-Neuve, eastern France. Photo: Sébastien Bozon/AFP
Wrapped up under several layers including thick parka coats, Raad and Wissam, 33 and 27, hang posters and help put up shelters as they lend a hand to the organisers of this weekend's World Cup stop-off in the Jura.
“For us, it's an honour. We want to be part of the joys and sorrows of the people who have welcomed us here and it's a way to say thank you to France, to give back a bit what they give us,” explained Raad, one of several members of the Hadaya family who fled their hometown of Qaraqosh.
They escaped the northern Iraqi city, home to a large Christian population, at the time of the arrival of the Islamic State jihadist group, in August 2014. Forced to relocate to Erbil, in the autonomous Iraqi Kurdistan region, they sought asylum in France, hoping to avoid the daunting trek — by sea, then through Turkey and the Balkans — undertaken by hundreds of thousands of others fleeing the war. After two years of waiting in “very difficult”
conditions, they received the go-ahead to fly to France.
The contrast between the warmth of their hometown and the Arctic temperatures in Chaux-Neuve, not far from “the little French Siberia” known as Mouthe, is biting.
“The people warned us 'the cold is coming, the cold is coming!' and they lent us warm clothes,” said Raad.
An English teacher, Raad and his nephew, a tiler by trade, have been working since Wednesday with some 500 volunteers for this World Cup event where 15,000 visitors gather each year.
“They're very motivated, lovable, always available and above all, they speak English, which comes just at the right time, because with the foreign athletes and International Ski Federation, everything is done in English,” beamed event coordinator Samuel Lopes.
“It's a real help,” he added as the two Iraqis made sure to greet everyone upon their arrival at the venue, instantly winning over the local volunteers.
The 10 members of the Hadaya family, including two grandparents in their 70s, and three young children, have been living in Mouthe, a small village of 1,000 inhabitants, since last summer.
Despite the trauma of having to uproot, Raad and Wissam are grateful to have left the Iraqi torment behind them.
They said it was a relief to find a safe place to live and send their children to school, before explaining their next mission is to learn French to help find employment.
Not everyone was initially at ease with arrival of the refugees in Mouthe, but “they integrated quickly, people straight away saw they were good people, very pleasant and very polite,” said Gilles Goelzer and Denis Pagnier, members of the Welcome and Solidarity association in Hauts du Doubs.
“We have to be good individuals with these people who do so many things for us,” said Raad, who has already several new friends, many of those at the church his family attends each Sunday.
But the pain of leaving home and the loss of their past lives is recognisable in Wissam's sombre expression, and he tries to stay in touch with those close to him via the internet.
“We were waiting for the liberation of Qaraqosh. It's done. But the churches, the schools are destroyed, the houses have been burned,” he said. “So for now, it's difficult to imagine going back. We'll see in the future, a future that is very uncertain.”