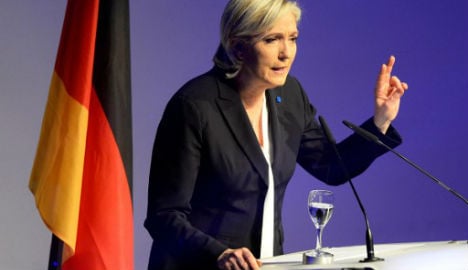 Marine Le Pen giviong her speech in Koblenz. Photo: Roberto Pfeil/AFP
Emboldened by the Brexit vote and Donald Trump's US presidential victory, the far-right National Front leader said voters in France, Germany and the Netherlands would be next to reject the status quo.
“2016 was the year the Anglo-Saxon world woke up. 2017, I am sure, the people of continental Europe will wake up,” she told a cheering crowd at a conference hall in the western river city of Koblenz, on the river Rhine.
“It's no longer a question of if, but when,” she added in a speech that railed against migration, the euro and open borders.
Billed as a “European counter-summit”, the Koblenz gathering is also being attended by Frauke Petry of the anti-immigration Alternative for Germany (AfD), Geert Wilders of the Dutch anti-Islam Freedom Party, Harald Vilimsky, secretary general of the Freedom Party of Austria and Matteo Salvini of Italy's anti-EU Northern League.
The conference comes just a day after the US inauguration of Trump, who assumed power with a staunchly nationalist address in which he vowed to put “America first”.
The Koblenz participants have repeatedly voiced their admiration for the maverick billionaire, and like him are hoping to shake up the political landscape by capitalising on a tide of anger against the establishment and anxiety over migration.
“Yesterday a new America, today Koblenz and tomorrow a new Europe,” Wilders told the 800-strong crowd in German, to loud applause. “We are the start of a patriotic spring in Europe.”
The charismatic Dutch MP currently tops polls ahead of March parliamentary elections but observers say he is likely to struggle to find the coalition partners needed to govern.
The Koblenz congress has been organised by the European Parliament's Europe of Nations and Freedom (ENF) grouping, which was set up by Le Pen in 2015 and is now home to 40 MEPs from nine member states.
It has been touted as a chance for the parties to highlight their common ground but political analyst Timo Lochocki of the German Marshall Fund said the event was mainly “just good PR” as the parties had little to gain from
strengthening ties.
“This is largely to increase media attention,” he told AFP. “The reasons why people vote for these parties are purely national and are independent from any alleged cross-national cooperation between the far-right.”
The meeting of some of Europe's most divisive politicians has stirred controversy in Germany.
Authorities in Koblenz are bracing for a large protest later on Saturday by a coalition of left-wing groups, mainstream political parties and unions. More than 1,000 police officers have been deployed to keep the demos
peaceful.
Gathering under the banner “Koblenz stays colourful — No room for right-wing populism”, the demonstrators say they plan to play a rendition of Beethoven's “Ode to Joy”, the EU's anthem, outside the conference venue.
German Vice-Chancellor Sigmar Gabriel of the Social Democrats is expected to join the protesters, while Luxembourg's foreign minister Jean Asselborn is scheduled to address the crowd.
Chancellor Angela Merkel has ruled out meeting Le Pen ahead of the French polls, with her spokesman saying the French far-right politician's policies have nothing in common with those of the German government. Le Pen hit back at the perceived snub on Twitter.
“I am going to Germany to meet its future, the AfD, not its past, the CDU,” she wrote, referring to Merkel's conservative party.
In the run-up to the congress, AfD MEP Marcus Pretzell, Petry's husband, triggered widespread criticism when he announced that several German media outlets had been denied accreditation because of their perceived bias.
He said those barred “can watch the livestream”. AfD co-chief Petry meanwhile has come under fire for taking part in the meeting at all, with some prominent AfD members questioning whether the party should be cosying up to Le Pen, and in doing so, lurching further to the right.
The AfD started out as an anti-euro party but has since gained ground by railing against Merkel's liberal refugee policy, which has brought over a million asylum seekers to the country since 2015.
It is polling at between 11-15 percent, ahead of a general election in September, boosting its chances of becoming the first hardline rightist party to enter Germany's parliament since 1945. 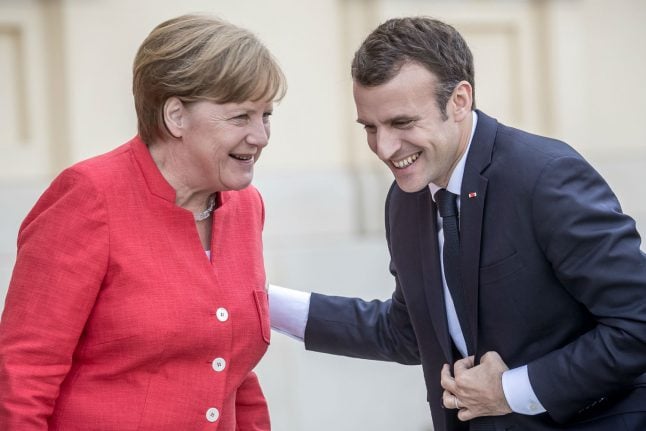 Merkel and Macron on April 19th on the International Day of Friendship. Photo: DPA

The meeting will focus on “European subjects including the euro, migration, technology and the international situation,” the official in the French presidency told AFP on Monday.

He did not explain why the two leaders were meeting in Marseille instead of the French capital, or give other details of the visit.

Their talks will come after a trip by Macron to Luxembourg on Thursday to consult with the prime ministers of Luxembourg, Belgium and the Netherlands on efforts to deepen European integration.

Animosity between Macron, a pro-EU centrist, and eurosceptic and nationalist governments in Italy and Hungary broke into the open last week.

Hungarian Prime Minister Viktor Orban and Italy's far-right Interior Minister Matteo Salvini identified Macron as their adversary on immigration, leading Macron to reply that they were right to see him as their “main opponent.”

The French president has made foreign visits a key element of his campaign to rally support for his ambitious reforms for the EU, including closer cooperation on security, immigration and the economy.

He has actively courted Merkel, seeing her as key to his agenda, but the German leader emerged badly weakened from elections last year and has given only lukewarm backing to many of his proposals.

She is facing intense pressure to clamp down on migration in particular after allowing some one million people to enter the country since 2015, which has bolstered support for far-right parties.

The anti-immigrant AfD party entered the German parliament for the first time last year, and in July Merkel had to agree to tougher immigration policies to stave off a rebellion led by her own interior minister.

Other EU countries also remain sceptical of Macron's agenda, against a backdrop of rising nationalism as leaders bicker over how to handle the thousands of migrants fleeing war and misery in Africa, the Middle East and Asia.

European leaders will meet for a summit on September 20th in Salzburg, Austria, to try to hammer out their differences, nearly three months after barely reaching a deal on migrants at an EU summit in Brussels.