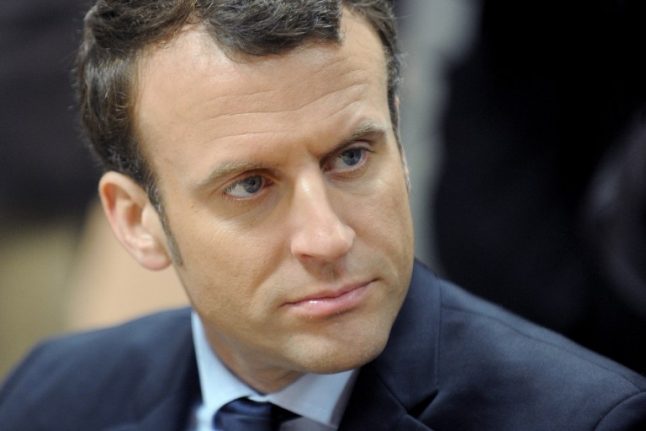 Photo: AFP
After queueing in the dark for more than an hour, hundreds of voters who had turned out in winter rain to see France's fast-rising presidential candidate Emmanuel Macron faced disappointment.
“The space is full. We can't let any more people in,” the 39-year-old former economy minister told the crowd as he appeared in the gloom outside a sports centre in northwestern Quimper on Monday.
Among the mass of people hunched in thick coats and hats stood Jean Yvard, a small business owner from the local Brittany region, who came to hear what he described as a “social phenomenon.”
Yvard, 53, said he had always voted for the right, but in the election in April he is considering the centrist Macron, who quit the government of Socialist President Francois Hollande in August, to run as an independent.
“What he's proposing is still not known, but it'll come. What's known is his attitude, the personality,” Yvard told AFP as the final spaces filled up in the 2,500-capacity venue.
Others, from retirees to a 23-year-old shop assistant, were also curious about someone who, less than 100 days before voting, has suddenly picked up momentum.
Pollsters now tip him as a serious candidate, bookies have slashed their odds for victory, and regular crowds of thousands are testament to his pulling power.
“From around December, we started thinking that it's a possibility we might win,” a senior aide said on condition of anonymity.
For fans he's a fresh face in a fossilised political system, a reformer with a social conscience, an ex-banker who understands both business and the “banlieues” — France's gritty multi-ethnic suburbs.
His critics see a shallow sensation fuelled by media hype, or an elitist snob who has never been elected and is backed by chief executives.
Far-right leader Marine Le Pen has called him the “candidate of the banks.”
Which one of these images takes hold could determine an election widely watched after the political shocks of Brexit and Donald Trump in 2016.
Until recently, it had been portrayed as a battle between the conservatism of Francois Fillon from the rightwing Republicans party versus the anti-immigrant far-right of Le Pen.
Could France, a nation with a developed sense of its own exceptionalism, buck a global trend of rising rightwing nationalism and elect a pro-European progressive? 'Makes us dream'
At the speech, dozens of volunteers in white t-shirts point to one of Macron's undoubted achievements: the creation of a grassroots political movement from scratch in nine months.
He angered Socialist colleagues by launching “En Marche” (“On the Move”) in April while still a minister. Four months later, he quit saying he had seen “the limits of our political system.”
The mood at the rally was sober and studious. Unlike the flashy patriotism displayed by his rivals on the right, only a single tricolore — next to an EU flag — stood on stage. There was almost no music.
“The destiny of France is a European destiny,” he said to applause before criticising politicians such as Le Pen who routinely blame the country's ills on the European Union.
Though raised in other speeches, immigration had one passing mention and terrorism went unacknowledged in a 90-minute performance that held the attention, without ever firing up the crowd.
Heading home afterwards, local shopkeeper and life-long Socialist voter Nadine Griffon was impressed by his desire to help small businesses.
“He's practically the first person who speaks about us,” said the 56-year-old.
She also touched on a key part of his appeal: his youth and his image as a maverick in a country worried about its decline and angry at its political class.
“He makes us dream a bit and, hey, we all need to dream a bit, especially when you see what's happening in the United States,” Griffon said.
Big unknowns
But the lover of literature also has vulnerabilities.
While at ease among farmers during his Brittany visit, he tends to talk frankly and can sound condescending, whether referring to “illiterate” abattoir workers or “alcoholic” laid-off workers.
When confronted by a protester in a T-shirt in May, the millionaire ex-banker lost his cool, and said: “The best way to buy yourself a suit is to work.”
He might also suffer from a smear campaign by rivals, eager to highlight an unusual marriage to his former schoolteacher more than 20 years his senior.
Above all, the French left is divided between him, a still undetermined Socialist party candidate and the hard-left Jean-Luc Melenchon, potentially splitting the vote.
After a first round on April 23, only two candidates will progress to the May 7 runoff.
And although Macron is drawing defectors, there remain doubts about the depth of his team and his ability to win a workable majority in parliamentary elections in June.
“What is incredible for the moment is that he is playing on his image of freshness, of competency, of compromise, without revealing much of his programme,” political science professor Frederic Sawicki said.
“Until when will voters wait to open the bottle and see what's inside? When they do, will the contents match what's on the sticker?” added the academic from Paris-Sorbonne University.
By the AFP's Adam Plowright.