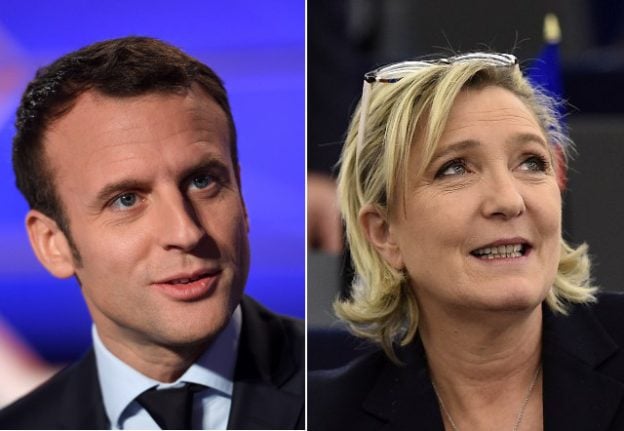 Photo: AFP
A little over three months before the French begin voting in an election that could decide the European Union's future, the race is seen as wide open.
Most polls show National Front leader Le Pen — who wants to exit the eurozone and hold an election on France's membership of the EU — going through to the May runoff, along with conservative candidate Francois Fillon.
But recent surveys have shown Macron, 39, gaining ground.
“It would be a gift if I met Macron in the second round,” Le Pen told AFP.
“You couldn't dream of a clearer, total clash of ideas.”
Le Pen, who is running on a French-first, anti-immigration platform that contains shades of Donald Trump's campaign in the US, has billed the election as a choice between defenders of globalisation and “patriots”.
On Tuesday, she dismissed the youthful-looking Macron as the face of “unabashed globalisation”.
“A face-off between a globalist as unabashed as him and a patriot like me would be ideal,” 48-year-old Le Pen said.
Macron, a former Rothschild banker who served two years as economy minister under President Francois Hollande, styles himself as a third-way candidate who supersedes France's entrenched left-right divide.
He is running as an independent.
A survey Tuesday showed him to be France's favourite politician, with 40 percent of voters saying they supported Macron, compared to 32 percent for Fillon and 26 per cent for Le Pen.
The Odoxa poll of 984 people for French media did not ask respondents for their voting intentions.
Turning supporters away
An Elabe poll of 995 people conducted in early January showed Macron pipping Le Pen for an election run-off spot in two of eight scenarios tested by pollsters.
On Monday, he was forced to turn away around 500 people at a rally in the western town of Quimper because the 2,500-capacity venue was full.
Macron's rise has overshadowed a primary to choose the candidate of theSocialist Party.
Two rounds of voting are planned on Sunday and January 29, with pro-business former prime minister Manuel Valls facing a stiff challenge from two leftist party dissidents, former economy minister Arnaud Montebourg and former education minister Benoit Hamon.
Hollande ruled himself out of the running in December.
Current projections show the Socialist candidate crashing out in the first round on a wave of frustration with the party's lacklustre record in office, particularly its failure to revive the economy.