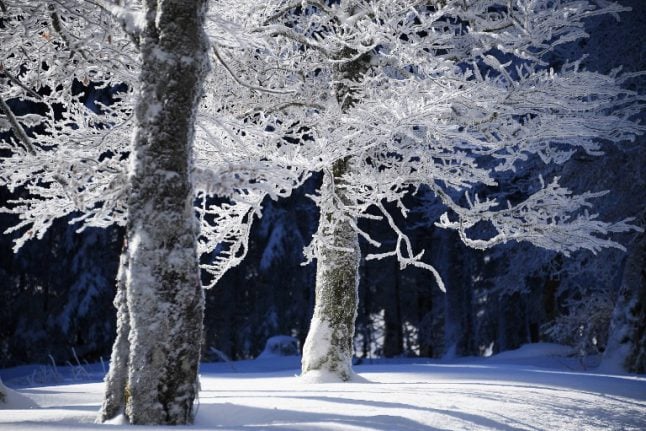 A snow covered tree near Belmont in the Jura department of eastern France. Photo: AFP

Here's a look at the how the coldest spell in five years is making France shiver. Frozen trees near the town of Belmont in eastern France. It's also time to don the snow shoes if you near Belmont in the Jura department of eastern France.

And snow covered the vineyards of Beaujolais.

The Mediterranean island of Corsica, normally known for its sun and pristine seas in the summer has also been on alert for snow and ice.

The picture below shows the village of Vivario, where thousands of homes were left without power on Monday. There were also spectacular images of the village of Bocognano, which was also hit by power cuts. It was time to wrap up warm in the central city of Lyon, which has seen snowfalls in recent days. But the cold spell has meant bad news for homeless people in Paris, many of whom are still sleeping out on the streets, often on heating vents or anywhere they can get warm. And a frozen Velib bike saddle in Paris. Don't be fooled by this picture of Nice on the French Riviera. The mercury is as low as -1.7C.

Of course, Chamonix in the Alps is looking as spectacular as ever.

The countryside of central France, this time in Ain, is looking pretty under a dusting of snow.

But just for a little perspective. This year's big chill is nothing like that of 1879, when the River Seine froze over. Check out the pic below.

Got any winter pictures from France? Send them to [email protected]