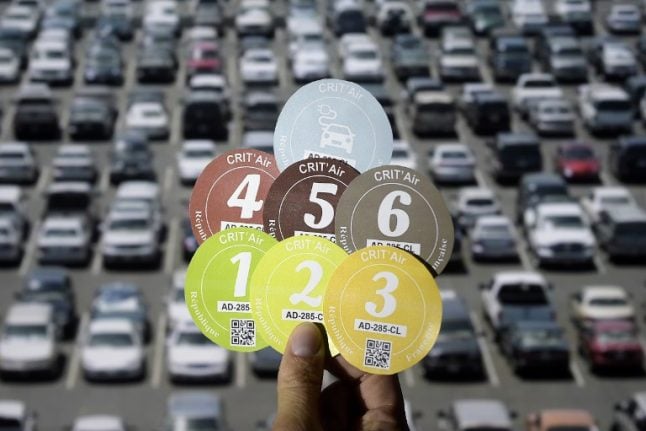 Photos: AFP
Why the stickers?
The stickers are the latest attempt from Paris authorities to crack down on pollution, essentially by stopping old polluting cars from driving at peak times.
And it's high time Paris took air pollution seriously, recording several spikes over the past two months that prompted traffic restrictions and free public transport. What colour sticker should I have?
There are six categories and colours, depending on the year of the vehicle's registration, its energy efficiency, and the vehicle's emission quantity.
The stickers range from “green” for electric or Hydogen vehicles, to a level 5 sticker for the most polluting vehicles.
Here's a look at the stickers together with the full descriptions (or download the English PDF version here). Hang on, I can't see my vehicle in the list above…
Some vehicles aren't assigned to any category, meaning they're banned from driving in the city from Monday to Friday between 8am and 8pm.
These include any that are registered from earlier than 1997, scooters and motorbikes from before June 1st 2000, and trucks and buses from before 2001.
What happens if I don't have one?
You should have yours up by Monday the 16th of January. The stickers were released on July 1st last year, so you've had over six months to get one.
Police may be generous with a grace period considering people have been slow to put theirs up so far, but they won't stay gracious forever.
Fines start at €68, so there's no point in risking it. And foreign vehicles aren't excluded, the City Hall said.

Top city transport official Christophe Najdovski has said that police will target vehicles with no stickers when they're pulling people over. You've been warned! So how do the stickers actually work?
Before these stickers, authorities would simply ban half of the vehicles in Paris from driving whenever pollution levels were too high.
The bans were rolled out based on whether a registration plate included an odd or even number.
This system didn't really work, because even the ultra-polluting vehicles were still on the roads half the time. Many people also ignored the bans, which of course may still happen with the new stickers.
From Monday, pollution spikes will see authorities restricting traffic by banning those with various coloured stickers.
They'll start by banning level 5 vehicles – which are the most polluting – then they'll move downwards from there. The bans will apply for anywhere inside the peripherique ring road.
Grenoble in south eastern France has said it will also roll out the sticker system.
Why don't I have a sticker?
Probably because you haven't ordered one. Here's the site where you can select your sticker and have it sent to your home for around €4.
Safe driving.