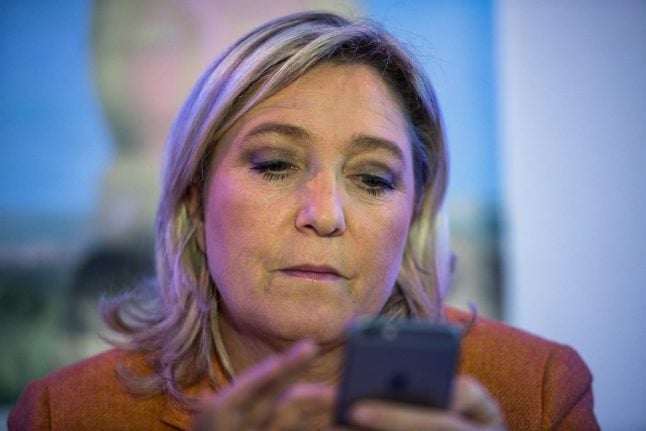 Domination of social media was a key weapon in Donald Trump's rise to the US presidency, and now France's far-right leader,
Marine Le Pen, is looking to follow suit, analysts say.

Le Pen has more than a million followers on both Twitter and Facebook, giving her a bigger social media platform than any other candidate for the French presidency.

Her party, the National Front (FN), is a veteran presence on the internet — it was the first political group in France to launch a website, back in 1996.

Now the party is trying to use the digital world to trump mainstream rivals and bypass the traditional media, “to speak directly to the public.”

“The advantage of social media”, says political communication expert Christian Delporte, “is that you don't have any opposition. You have your say, and you're not bothered by a journalist who may contradict you.”

One method is to undermine Fillion by alleging he has Islamist leanings — a “fake news” tactic of a kind that was all too familiar in the US presidential campaign.

Two hashtags in this regard have been #LeVraiFillon (“#the real Fillon”) and #FaridFillon.

They are campaigns where trolls try to tie the former prime minister — who has written a book called “Beating Islamic Fundamentalism” — to the Islamist cause.

The FN denied being behind the hashtags but when asked about it, Le Pen added fuel to the fire: “The real question is, what is Francois Fillon's relationship with Islamist fundamentalists?” Also in the far-right sights is former economy minister and centrist independent candidate Emmanuel Macron. He and Fillon are expected to be key challengers to Le Pen's hopes of winning the presidency in the April and May election rounds.

Trump was largely vilified in the traditional press but used Twitter, where he has around 20 million followers, to share his message and attack his opponents.

“Trump had a way of taking to Twitter and could literally change the narrative because he had such a large following,” digital analyst Alan Rosenblatt said after the November election.

“It became possible for him to construct an alternate narrative, I would say an alternate reality,” said another commentator, Gabriel Kahn.

The FN's approach is somewhat different, firing out its message across several different social media accounts at the same time.

But, like Trump's, it seeks to craft the image of a movement that is supported by the majority and whose ideas are mainstream, not fringe.

As election time looms, commentators expect the FN and its supporters to mount a crescendo of tweets and hashtags, creating “trending topics” intended to lure other users.

The barrage will polish Le Pen's image, denigrate her rivals and hound critics — and make her appear to be the vanguard of an unstoppable movement.

The steamroller tactic is a hallmark of Trump's stunning political upset.

The FN revels in its digital strength, describing it as an ability to reach directly to hearts and minds.

“It's working like a dream, the others are really struggling to respond,” said Le Pen's campaign director, David Rachline.

But dominating social media is no guarantee of success at the ballot box. Digital and political cultures vary, as Austria's presidential elections last month showed.

Far-right Freedom Party candidate Norbert Hofer was beaten by Alexander Van der Bellen of the Greens, even though Hofer flooded social media in the runup to the vote.