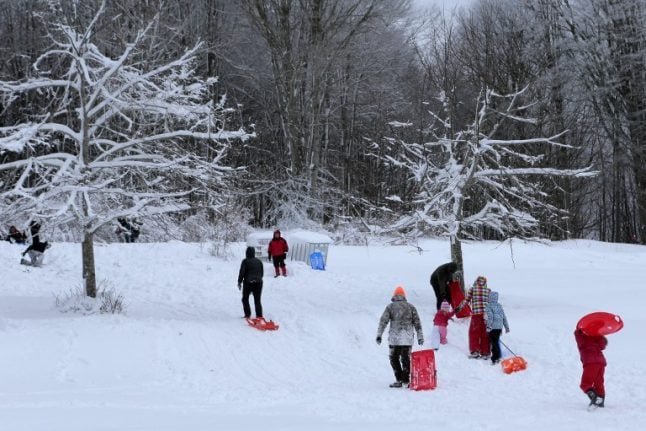 Photo: AFP
Yes, things are about to get seriously chilly in France.
National weather agency Météo-France said that temperatures this week would be from 4C to 8C colder than seasonal averages.
It added that the nights would be particularly numbing, as the country experiences its coldest temperatures since 2012.
Predicted temperatures for Tuesday include -11C in eastern France's Mulhouse, -9C across central France and in Strasbourg, -6C in Toulouse, and -4C in Marseille.
Paris should get as low as -4C during the nights.
Meanwhile, the agency has issued avalanche alerts to four departments in near the Pyrenees to the south west. France in the early hours of Wednesday morning:
But there's no need to panic, Patrick Galois from Météo-France told L'Express newspaper, adding that the cold snap would only be of “moderate intensity”.
He said the weather wasn't a patch on “the historic chills of February 1956 or January 1985 when temperatures dipped to -19C in Toulouse”.
The sub-zero temperatures are expected to hang around until the end of the week.
Temperatures of -10C coupled with winds of 50km/hr in the north this week will make it feel like -20C, meteorologists said.