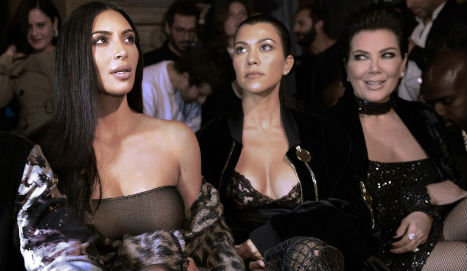 Kim Kardashian, Kourtney Kardashian and Kris Jenner attend a fashion show in Paris in the days leading up to the robbery. Photo: Alain Jocard/AFP
A total of 10 have now been charged including five accused of a direct role in the robbery, during which Kardashian was bound and gagged at gunpoint,  locked into a bathroom and robbed of jewellery worth some nine million euros ($9.5 million).
The 60-year-old ringleader's DNA was found on the materials used to bind Kardashian, leading police to the other suspects, sources close to the probe said earlier.
Those charged on Friday include three others suspected of direct involvement in the heist, while the fifth was charged on Thursday.
The ringleader's son and girlfriend were charged with abetting the biggest jewellery theft from an individual that France has seen in more than 20 years.