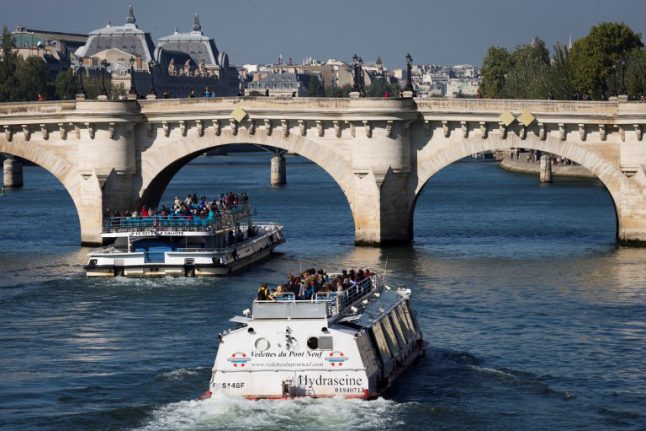 The mayor of Paris has already made it clear she is not the most car friendly of city leaders.

She has moved to ban diesel vehicles, old trucks, coaches and old cars from the city in a bid to cut pollution. She has also closed part of the highway along the right bank of the Seine to the traffic, just as her predecessor Bertrand Delanoë did on the Left Bank.

With the relentless war on cars underway, authorities in Paris are looking for new ways of transport and they are looking to the past to get inspiration for the future. (The Right Bank, with no cars. Photo: AFP)

Until the Metro system was built to cover most of the city the River Seine provided one of the main forms of transport in the city with shuttle boats ferrying Parisians (not just tourists) up and down the Seine. By around 1930 the service was ditched as commuters headed to the underground train service.

More recently, from 2008 to 2011, catamarans called Voguéo ensured transport from Maisons-Alfort to the Gare Austeritz. However, due to a low number of passengers, the service was stopped.

Now city chiefs want to have another go at making the waterway which snakes through the heart of the capital more useful. The study will look into “feasible long-term solutions” by examining how other cities around the world have developed river transport.

In London, for example, Thames Clippers provide a dozen river tour routes, aimed specifically at tourists, as well as river bus routes which were used by 4 million passengers in 2016.

And concrete measures have already been taken.

In a bid to encourage more commuters to use the river Valerie Pecresse, the president of the greater Paris Ile-de-France region, is trying to persuade them to take the hop-on, hop-off Batobus service.

From January 17th anyone holding a monthly Navigo pass service will be able to pay €40 for a yearly pass that allows for unlimited travel on the Batobus, which stops at nine points along the river including The Town Hall and the Eiffel Tower.

“We are offering an alternative way to people who want to travel along the river banks, which have been closed off to traffic,” said Pecresse, who is against the move to close the Rive Droite.

“We can't just wait and watch traffic jams grow. Our offer doesn't compete with other means of transport in terms of speed, but it's comfortable, enjoyable, and more environment-friendly.”

Easily the most exciting river transport project is the Seabubbles – dubbed “flying water taxis” that promise to take passengers from one side of the city to the other in just 15 minutes.

They can carry up to four people, as well as the pilot, and once in the docking station solar panels and energy produced by the river's current will recharge the Seabubbles' batteries. These flying taxis skim over the water as they gain speed, reducing friction by 40 percent compared to a regular boat.

The machines, which will be tested on the Seine as early as next month, are the creation of French yachtsman Alain Thébault, who said his dream was always to make sailboats fly. “The idea actually came from my daughters after I sailed from LA to Hawaii recently,” an energetic Thébault told The Local.
“They told me to invent a zero-emission cab because they were sick of seeing the pollution in Paris, London, and in the US.”
“Initially, there will be drivers, but quickly, our vehicle can become autonomous,” he added.
The project is already backed by several investors, and 100 people have already registered interest in owning their own bubble. The trend to make the most of the river has even led to the creation of a floating gym for those who fancy working out whilst enjoying a fantastic view of Paris.

This project won't rely on solar power, but manpower instead.

Up to 45 people will be able to exercise on this floating glass-top gym. The energy produced whilst on the bikes and cross-trainers will be used to power boat's electric propellers. The roof on the glass exterior would be closed during the winter, but the covering would be removed in summer months.

Further feasibility analyses would need to be conducted before the vision could become a reality, but the design team estimates that the boat could be fully designed, built, and tested in 18 months.