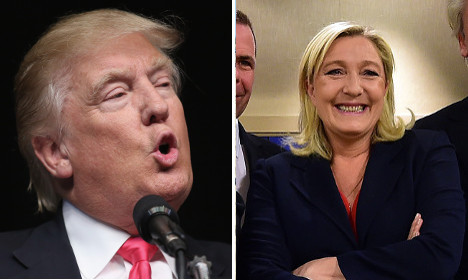 When it emerged earlier on Thursday that Le Pen, a candidate in France's presidential election, was in New York, her campaign team insisted it was a purely private visit and she was not due to meet Donald Trump.

However her aides did make it clear that if Trump could spare a few minutes and extended an invitation to the National Front leader, then she would warmly accept it.

And perhaps her wish has come true.

On Thursday afternoon she was caught by an eagle-eyed snapper in the famous Trump Tower, the headquarters of the US-president elect's empire.

She was seen having a coffee in Trump Ice Cream Parlour.

Sam Levine, associate political editor of the Huffington Post tweeted out the pic and it quickly garnered hundreds of retweets.

It wasn't immediately clear who Le Pen and her partner Louis Aliot were talking to and whether she was to meet Trump himself or just his advisers. When asked by journalists she declined to answer.

“She is not meeting with anyone from our team,” Trump spokeswoman Hope Hicks told reporters.

“No meetings. It's a public building,” Trump spokesman Sean Spicer said. Several hours later, friends confirmed that she had left out of public view.

“Private visit. No statement,” Aliot wrote in a message when asked whether she planned to speak to reporters staked out in the lobby.

When contacted by L'Express newspaper, David Rachline, Le Pen's campaign chief, did not deny Le Pen's presence in Trump Tower, but suggested she was there for privately arranged meetings.

Le Pen is set to launch her official campaign on Feburary 4th in a meeting with supporters in the French city of Lyon.

She has repeatedly said she was supportive of Trump’s policies for the US and called him “a sign of hope” for European anti-establishment politicians.

When Trump was elected Le Pen sent out a congratulatory tweet before the result was even confirmed.

“I dare to repeat that the election of Donald Trump is good news for our country,” said Le Pen.