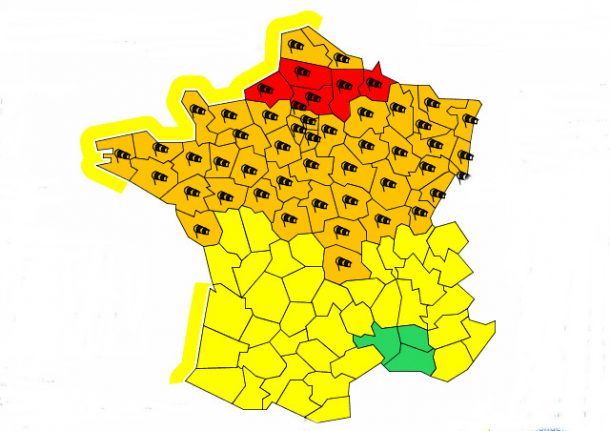 The departments on red alert are Aisne, Ardennes, Oise, Seine-Maritime and Sommem all in the far north of the country.

A red alert is the highest level of alert on the agency's scale, and meteorologists have warned residents to stay at home and to avoid any activities outdoors.

It said they could expect “a severe and violently strong winter storm” with winds of up to 140km/hr between 7pm and 1am.

An orange alert – which has been issued for the rest of the northern half of France – is the second highest warning level the agency issues and urges the public to be “very vigilant”.

The north coast of France may see up to 5 centimetres of snow overnight, while eastern France near the Belgian border could see up to 10 centimetres.

The strong winds mean that snow drifts are possible. Even Paris has been tipped to get snowfall later on Thursday night.

The strong winds mean that everyone in the north half of France has been urged to limit their movement outdoors and to beware of falling trees.
Traffic conditions are expected to be difficult and damage to electricity and telephone lines is expected.
Météo France urged people to store away items that could blow away and to avoid climbing on the rooves of buildings and homes at all costs.
The weather warnings are in place until 6pm on Friday.
The winter weather is expected to continue through to the weekend, when temperatures across the northern and eastern reaches of France are tipped to drop by 10C.
Some parts along the eastern border are expected to drop as low as -10C.