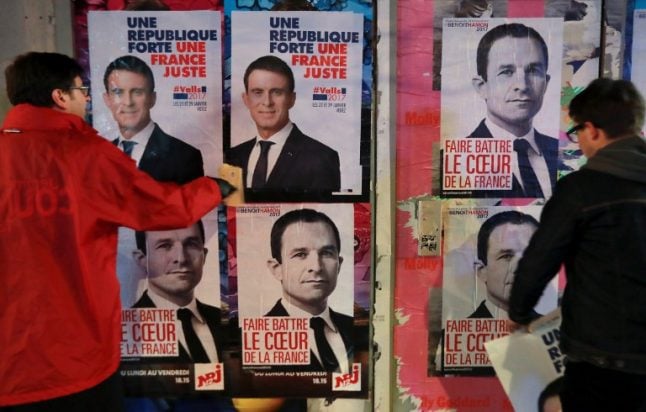 Former prime minister Manuel Valls went into the race as the favourite to represent his party after President Francois Hollande said he would step aside after a single, singularly unpopular term.

But in recent days the pro-business Valls has seen his poll lead shrink, with his leftist rival and ex-ministerial colleague Arnaud Montebourg beating him in some scenarios.

Two rounds of voting for the Socialist nominee will be held on January 22 and 29.

Irrespective of who wins the nomination, the Socialists are seen as having little chance of holding onto the presidency, with voters hungry for change after years of economic stagnation.

A Fillon-Le Pen runoff in May is seen as the most likely scenario.

The polls show the Socialist candidate crashing out in the first round, as voters across Europe tilt to the right or to anti-establishment parties like Le Pen's FN or Britain's UKIP.

Luc Carvounas, a senator and Valls loyalist, said the challenge in the first debate would be to “create interest and make everyone want to take part in the primary.”

But the vote risks paling in comparison to November's rightwing nominating contest.

The Socialists say they are expecting only about half as many to pick their contender. The ballot is open to all voters who pay one euro ($1.05) and profess to adhere to leftist values.

Valls, 54, needs to put in a strong performance in three debates over the coming week to see off strong challenges from Montebourg, a champion of state interventionism who is also 54, and another leftist ex-minister Benoit Hamon, 49.

Hamon is seen as the furthest to the left of the three. He has called for the introduction of a universal wage and pledged to make tackling rampant inequality in the French school system a priority.

Valls, who came to prominence as a tough-talking reformist, has struggled to unite his camp.

His rivals have accused him of betraying leftist ideals and pointed to his repeated use of decrees to ram unpopular reforms through parliament as proof of his authoritarian approach.

The Spanish-born ex-premier is now promising to phase out those executive powers.

“I haven't changed my convictions but I've grown wiser,” he said last week.

Looming large over the contest are Hollande's star former economy minister Macron and Communist-backed firebrand Jean-Luc Melenchon, both of whom are running for president outside of the primary system.

Macron, a 39-year-old former Rothschild banker who positions himself as “neither of the right or the left”, has drawn large crowds at his rallies.

“The spring will be ours!” he told around 2,000 supporters in the central city of Clermont-Ferrand at the weekend.