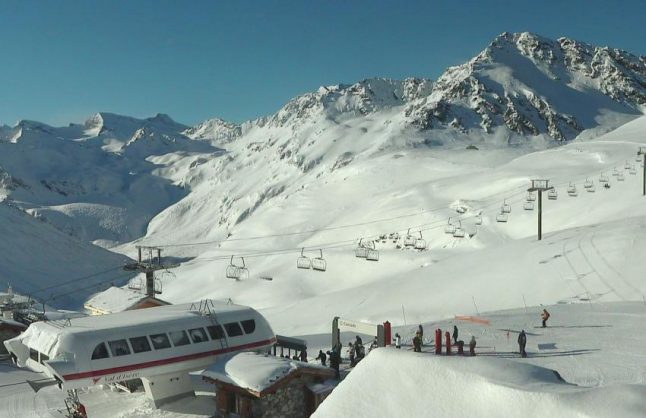 The snow covered slopes at Val d'Isere. Photo: Webcam/Val d'Isere
Ski resorts across the Pyrenees, the Vosges and the Jura mountains in eastern France and the Alps are welcoming the snowfalls with open arms after a disastrous snow-free Christmas season.
Holidaymakers heading for a white Christmas in France had faced disappointment during the holiday period, as many slopes had been left completely bare. The Chalmazel ski season in Massif Central, as seen from the webcam Photo: Webcam Val Thorens
But after suffering a 20 percent drop in revenue compared to the same period last winter, resorts are finally opening for business once again and rejoicing at the impressive snowfall which covered even the slopes at mid and low altitudes. Photo:  Cauterets/Facebook
It wasn't just the bigger mountains that saw snowfall, smaller resorts such as Laguiole in Aveyron, a department between the cities of Montpellier and Toulouse, were also able to open this week. The snow comes as a huge relief to resort owners, many of whom had to postpone the ski season.

[SAVE THE DATE 09.12.16]
Our ski area is ready to welcome you! More informations here : https://t.co/tx6rJ3RAJE pic.twitter.com/P14yNwnazw

Louis, who is 8 years old, arrived at the Aillon-le-Jeune ski resort in the Savoy department and was overjoyed by the real snow.
“We went up all the ski lifts that were open”, he told Europe1. “I was pleased because real snow is so much better than the false kind!”. Photo: Michel Raynal/ Facebook
After many resorts were forced to use snow-making machines to cover the slopes, however the snow produced from cannons was no substitute for the real thing, and it can even be dangerous.
Because it hardens much faster than natural snow, there has been an increase in ski accidents this winter.
by Rose Trigg
Url copied to clipboard!