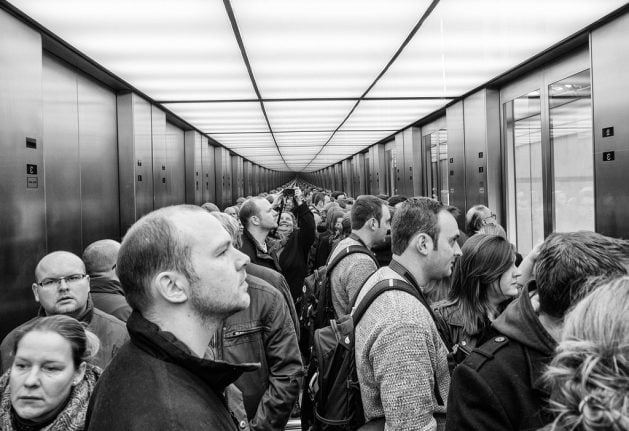 Photo: Georgie Pauwels/Flickr
Depending on where you come from and the lift protocols in that country, your first elevator experience in France could be one to to remember or indeed forget.
Here are some tips to make sure you don't press your French fellow passengers' buttons.
1: Say bonjour… Always.
Bonjour is the most important word in the French language and it's strictly necessary to use this word when you step inside an elevator.
In fact, the only times you shouldn't say it is during the evening, when it's bonsoir, or when you're entering an empty lift, obviously.
If you enter a lift without saying bonjour you've instantly broken the first etiquette law of France. And this goes for doctor surgeries too, and shops, restaurants, bakeries…
READ ALSO: This is by far the most important word in French 2. Say bonne journée on the way out
It might seem like overkill, but the French are almost robotic when it comes to these two key points of lift etiquette. Say bonjour on the way in, and then say bonne journée on the way out. If someone beats you to the bonne journée, then respond “et vous aussi” or “également” (in other words “you too”).
And if you get in the lift with someone you've already beeen in the lift with that day, then remember it's re-bonjour.
3. Engage in small talk… sometimes
Small talk in an elevator typically revolves around the weather, according to Camille Chevalier-Karfis, the founder of French Today.
She says typical phrases include:
“Il fait beau en ce moment, n'est-ce pas”… “quel beau temps pour la saison”… or on the contrary “quel temps de chien, c'est insupportable”. Photo: Gideon Tsang/Flickr
Of course, different rules apply if you're in a work lift or a residential one.
“If you are running into an acquaintance, like a neighbour you'd ask about them and their family. “Bonjour Monsieur Dupont. Votre famille va bien?” she says.
“If they are total strangers, you say pretty much nothing. And an awkward silence maybe.”
A survey by pollsters Ipsos, carried out for France's Elevator Federation last year, found that 60 percent of the French said they'd engaged in conversation with a stranger in a lift.
4. Don't treat it like your home
It might sound terribly obvious, but don't even think about eating on the go while you're in the lift, says France-based business etiquette expert Kara Ronin.
“You should never eat inside a lift, but carrying a takeaway coffee outside for a cigarette break is fine,” she says.

The same goes for eating on the go in general, the French aren't big fans of it, and might consider you to be rude if you do it. Meals are for enjoying, you should be sitting down.
5. Be prepared for a bit of flirting.. or more
A full 12 percent of French people admitted to flirting with someone during an elevation, according to the same 2016 survey.
And if you thought that those 12 percent were just creepy workplace flirts, then think again – 4 percent of respondents said they'd had sex inside a lift (and over 1,000 people were surveyed).
Report author Alice Tetaz said at the time that lift-lovemaking could be explained by the fact that an elevator is “an enclosed area, full of fantasies”, and she even pointed to a scene from blockbuster sex romp Fifty Shades of Grey as a potential inspiration.
Bonus advice: Take the stairs if in doubt
If you come across one of those tiny apartment lifts, you should carefully consider whether it's worth squeezing in with others.
Lifts have a maximum weight they can operate with, so you want to think twice before entering the small ones, otherwise you run the risk of getting stuck in a tight situation with one of your neighbours when the lift breaks down. You have been warned.
Another version of this article was published in April 2015.