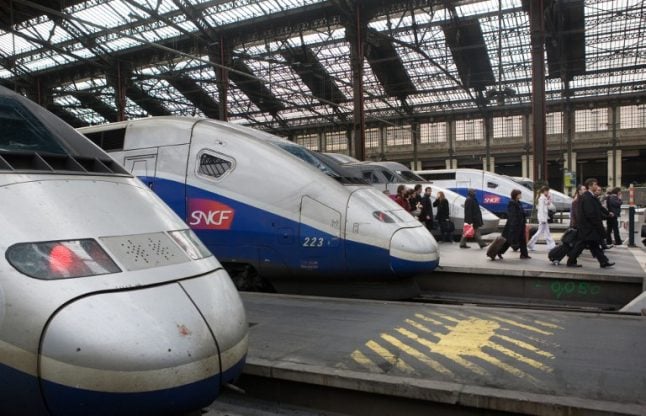 Photo: AFP
The pass has been named the “Happy Card” (yes, in English) and is now available for 16-27-year-olds.
Those hoping to nab themselves a card must buy it online and will have to sign up for at least three months, reported Le Parisien newspaper.
Those with a Happy Card, which will work for both high-speed TGV trains and the slower Intercité services,  will only be able to reserve a trip up to one month in advance, compared to three months for the rest of us.
SNCF is hoping to encourage younger people to travel more often by rail, reported the paper.
Recent studies have shown that young people are more and more likely to turn their noses up at train travel in France, preferring buses or car pooling.
One study showed that students accounted for 19 percent of the nation's bus travel, even though students only make up 5 percent of the population.
Train travel is expensive in France, at least compared to prices in neighbouring countries. A study in September revealed that France was the fifth most expensive European country for rail travel, with an average trip costing €17.59 per 100 kilometres.
This was expensive enough to rank it fifth out of 36 European countries, behind Switzerland (at €47.44 per 100km), the UK (€23.44), the Netherlands (€21.86), and Belgium (€20.54).

TRAVEL NEWS
OPINION: Trains are in fashion so why is rail travel across Europe still so difficult?