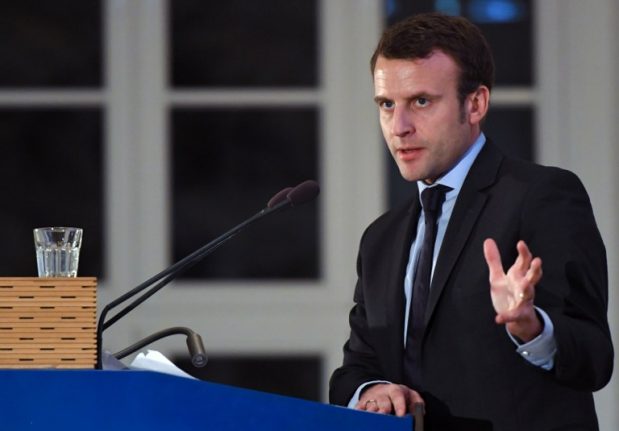 Photo: AFP
Former Economy Minister Emmanuel Macron, a candidate for this year's battle to be the next president of France, has just been on the road promoting his new En Marche party.
While in Berlin, he gave a lengthy speech on the Franco-German relations and the future of the European Union at the Humboldt University.
And he did it in English.
A series of tweets in English and French were sent out from Macron's account to go with the speech.

I set an ambition of enabling 200,000 young French people per year to go live in another EU country by 2022. #Erasmus #MacronBerlin pic.twitter.com/b6Iq3jS6rW

In fact, you could even acclaim Macron, not just for his grasp of the English language, that puts most former and current French presidents to shame, but also for being bold and confident enough to pull it off, knowing he might come under fire from some of his rivals back home who apparently liken a politician speaking English to treason and hatred towards France.

They include Marine Le Pen, the leader of France's far right National Front Party.
She took to the Twittersphere to share her disappointment at Macron choosing to speak in the language of Shakespeare, Queen Elizabeth II and David and Victoria Beckham.
“Presidential candidate Macron goes to Berlin and holds a conference in English. Poor France,” she wrote, garnering over 500 retweets.

Her vice president, Florian Philippot, tweeted: “It's not just that he doesn't respect our language, he doesn't believe in France.”
Le Pen's views aren't in line with the vast majority of students, it seems.
A survey in February showed that 90 percent of French students thought the president of France should be fluent in English, or even perfectly bilingual.
French politicians have a poor reputation for speaking good English, as the clip below highlights (though English-speaking politicians are rarely any good at French either).
Hollande was mocked in 2012 when he wrote to US President Barack Obama to congratulate him on his re-election and signed off with the words, “Friendly, Francois Hollande.”
It was an embarrassing mistranslation of the French word “amicalement”, used at the end of letters to mean “best wishes.”
In 2006, then French president Jacques Chirac famously stormed out of an EU summit in protest at a French businessman who had addressed the room in English.
During his speech on Tuesday, Macron warned that the European Union's single currency, the euro, could be abandoned within a decade if Paris and Berlin don't push through major economic reforms.
During his two days in the German capital, Macron also visited a qualification class for refugees that was hosted by railway company Deutsche Bahn.
Never elected and “neither of the left or the right” in his own words, the pro-business and technology-savvy former investment banker is hoping to shake up a race between older, more familiar figures like Le Pen and centre-right candidate François Fillon.
Macron recently said France was “blocked” and that next May the people “could refuse the status quo in order to advance.”
The former minister has been boosted by recent public opinion surveys suggesting he was the most popular politician in France and several opinion polls give him an outside chance of making the second round run off vote in May, where he will probably face Le Pen.
At least now he knows how to rile his rival.