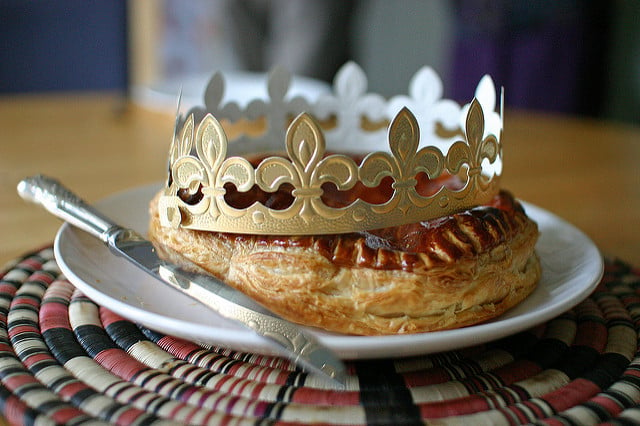 The annual January tradition of the Galette des Rois or “king’s tart/cake” is a big deal in France, especially for young children and families.

The Galette des Rois is scoffed down to mark the feast of the Epiphany, when the three kings turned up to give gifts to baby Jesus. So it’s important for Christian families.

But it’s not just an ordinary tart, because each one contains a charm, or fève in French, hidden inside by bakers and it's a proud moment for those youngsters (and some enthusiastic adults) lucky enough to find it in their slice (as long as they don't swallow it).

Whoever finds the charm, traditionally a porcelain figurine of baby Jesus, but nowadays anything from an animal to a car or other objects, gets to wear the crown that comes with the cake and names their king or their queen.

In other words the fève is important.

So you can imagine the reaction of the parents of one girl at a Catholic school in the town of St Malo in Brittany, western France, when she proudly brought home the charm she had chanced upon last week.

But it turned out to be anything but a slice of luck.

This was no figurine of baby Jesus or a donkey, but of a couple, obviously not Mary and Joseph, having sex in a certain position. The word levrette, which basically means “doggy style”, was written underneath.

The outraged mum took the charm back into school to show the headteacher, who immediately launched an investigation.

After making inquiries with the local boulangerie where the galette was purchased it turns out the apprentice baker was responsible.

His excuse for how the X-rated charm ended up in the hands of a schoolgirl was that he got his galettes mixed up and it was meant to have been delivered to a local rugby club, where it would have presumably gone down well.

According to the local Telegramme newspaper, most of the parents at the school accepted his profuse apology but some are apparently considering pressing charges.

For its part the headteacher at the school said “everything had been sorted out”.

A story worth remembering perhaps next time you buy a galette.