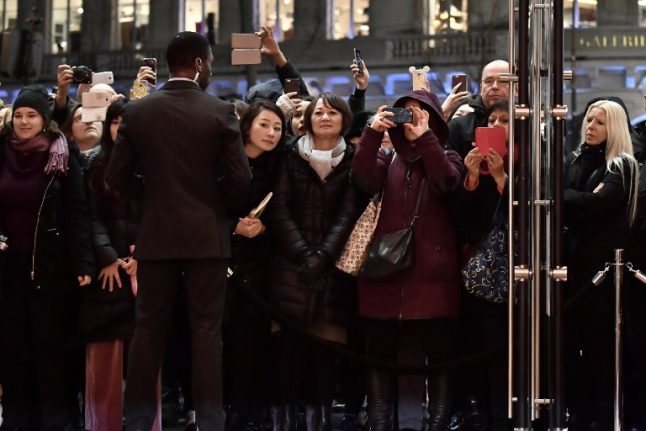 All photos: AFP
Wednesday the 11th marks the first day of the winter soldes, or bi-annual blowout sales, for the vast majority of France.

And they kicked off with a bang, with some eager shoppers lining up outside Paris department stores on Wednesday morning to get their hands on the best bargains. And why wouldn't they – stores are offering some head-turning discounts of up to 75 percent, as this list from L'Express newspaper shows.
For six weeks, the majority of retailers around the country will offer drastic discounts on clothing, jewellery, electronics, and more.
This sale season is a big deal because, apart from the summer sales, other such promotions in France are forbidden by law.
Here are some things to know before you start hunting for the best deals. When are the sales?
For most of the country, the sales begin Wednesday, January 11th and run until Tuesday, February 21st.
For the departments of Meuse, Moselle, Meurthe-et-Moselle, and Vosges, the period runs from January 2nd to February 12th, in line with neighbouring Germany and Luxembourg.
Who will be shopping?
Most of the French, it seems. A poll published on BFMTV revealed that 72.4 percent of respondents said they planned to hit the stores during the period.
This marked a 3 percentage point drop compared to the year before, the channel noted. How much will they spend?
An average of €221.78 per person, to be exact. At least that's what respondents predicted in the same poll mentioned above.

This marks a 2.9 percent increase in what people thought they would spend coming into the winter sales of 2016.
What's all this about government-regulated rules?
French commercial code sets strict guidelines for the soldes. To start, discounted products must have already been in the store for at least a month. Sale items must also be clearly marked and separated from non-sale items with the before and after price plainly visible. Online shops must also abide by these rules. Can I exchange my bargains?
Although some retailers might try to say the contrary, any product bought on sale is still subject to normal exchange and refund policies. In case of a hidden defect, the store is required to refund or exchange the product. But if you just changed your mind or bought the wrong size, the retailers aren't obligated to take it back.
Are the French soldes unique?
France is somewhat distinctive for being one of the few European countries with such strictly-regulated sales. Most other countries offer sales starting after Christmas but with fewer restrictions and flexible dates. In the UK, sales usually start on Boxing Day and are finished around the end of January.