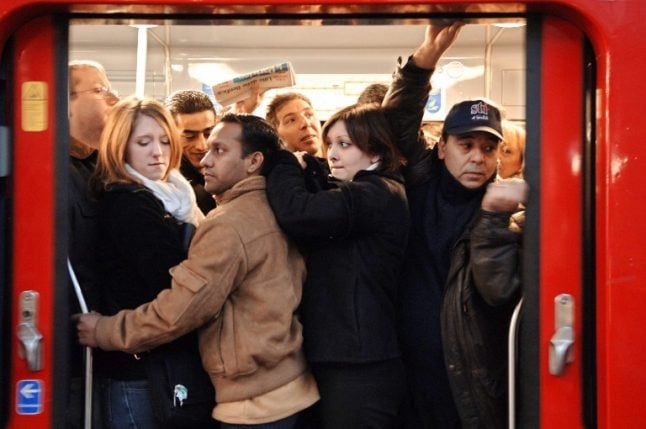 Photo: AFP
The RATP got 2,196 suggestions for how to fix the Paris public transport network in its “collaboration” with the public. It then narrowed that list down to just 15.
After a public vote (and some jury thinking), several of these ideas are planned to come into fruition.

The ideas include adding green spaces, libraries, air purifiers, and street art to the stations (read the full list here).
But sadly the shortlist does not include anything too groundbreaking and ignores many of the everyday problems that users face.
The Local France, with the help of readers, came up with some real things that need fixing. Here's our shortlist of 16 ideas.
1. Redesign the Metro map
The current Paris Metro map looks like a mystery straight from The Da Vinci Code.
It's too complicated, too many lines overlap, and too many stations are written too close to each other. What's worse, the train carriages themselves have only the tiniest version of the maps and you have to lean over people to read them.
Our idea: Redesign the map, taking inspiration from this Russian designer (who used a circular pattern, pictured below), or the Brit who turned the city into a wheel with each line like a spoke.
See an interactive version of this map here: CLICK HERE for a full map showing walking times
3. Stop calling Gare du Nord “Paris Nord”
Gare du Nord is one of the busiest train stations in Europe, passed through by countless non-French speaking travellers from all over the world.
And these people are all expected to know that the station is sometimes referred to as “Paris Nord” as well. How on earth could they just guess? Photo: Rose Trinh/Flickr
4. Stop expecting us to know all the “end stops”
When you're switching lines on the Metro, you're often given the option for which direction to head based on the final station of the line. For example change from Line 8 on to Line 7 at Opera and on the platform you are greeted with two options “Line 7 – La Courneuve” or “Line 7 Villejuif/Mairie d'Ivry” which lead you up different staircases.
How on earth are you meant to know which one to take if you are a first-time user? In the end you just have to consult a map. The words “Northbound” or “Southbound” or something like “Via Gare de l'Est” would help us know which direction we need to be going in to get to our stop.
5. Make changing lines easier…
They could signal where to stand on platform so we are in the right place to change onto a certain line. Or they could signal to us on the map how long it takes to change because some changes are rapid and others, for example if you have to go through Montparnasse or Chatelet, make you feel like you are walking there.
And open up all those passages that say “No Entry” but in are really sneaky short cuts for changing lines.
6. Air conditioning
Anyone who has been on a train stuck in a tunnel during a heatwave will agree that air conditioning would have improved the experience ten fold.
Enough said. Photo: AFP
7. Give us internet connection
Come on guys, get with the times and let us use the internet while we're riding the Metro. All this avoiding eye contact is getting difficult, we need to play Candy Crush (or whatever it is nowadays).
8. Smart phone tickets
What's all this lining up to buy a single paper ticket (or pack of ten), using it once, throwing it in the bin, then repeating the process next time?
And let's not forget some entrances don't even let you buy a ticket anyway.
Let us buy a tickets via our smartphones or bank cards like they do in other countries.
9. High speed rail link direct to airports Getting to Charles de GAulle and Orly is a pain in the cul.
France does plan to build an express link between the centre and Charles de Gaulle airport but it won't be complete until 2023. Speed this up, government. And what about getting to Orly? There's the Orlybus from Denfert-Rochereau, or RER B and then the OrlyVal rail shuttle (separate tickets needed) or RER C and a shuttle bus or Metro line 7 and a tram.
Can we just have one direct express line from say Denfert Rochereau or Chatelet?
10. Improve disabled access and access for parents with prams
Public transport is not easy in Paris for the disabled or those carrying babies in prams, with most of the stations not offering lifts.
Many don't even offer escalators, and let's face it, the escalators often don't work anyway. Can we just improve lift access at all the stations please. Photo: AFP
11. More stern staff telling people not to push on the trains
On the London underground  there are staff with megaphones sternly telling people to allow passengers to get off first. On Metro Line 13 there are regularly staff making sure passengers get off the train before the almighty rush to get on, but they are fairly quiet and often afraid to speak.
Paris could do with some old school masters armed with megaphones and canes to help the locals learn a few lessons in commuter etiquette.
12. Make bus and train tickets transferable
Currently, you need to get a new ticket if you want to switch between buses and trains on the same journey. Why?
13. Allow a “top up” Navigo pass
Some people don't use public transport enough to warrant a monthly pass, so they're stuck buying paper tickets. Why not bring in a flexible pass, says Donna Bull, especially if you can add a few euros here and there.
Just like the Oyster card in London, essentially. Many Facebook followers wanted to put a stop to those sneaking into the Metro. One suggestion from Chris Balchin was to hire extra staff to catch the dodgers, paying their salaries with the extra revenue from ticket sales.
15. Add toilets to the Metro stations
It's no secret that the subway smells of urine, and perhaps toilets could help to encourage people to be a bit more sanitary.
16. Fix Chatelet-Les Halles
Two separate Facebook followers said authorities should “nuke” the station, although we feel that might be a bit drastic. The huge station, however, is a major sore spot for many commuters, mostly due to the lack of signage, the difficulty in finding connections, and the seemingly incorrect “walking time” suggestions.
“I always prefer going 2-3 stops out of my way and taking an extra connection than going though that purgatory,” wrote Kieran Colfer.
Obviously, “fixing” such an enormous station is a mammoth task, but we can probably all agree that clearer signage would be a big plus.
Another version of this story was published in November 2016.