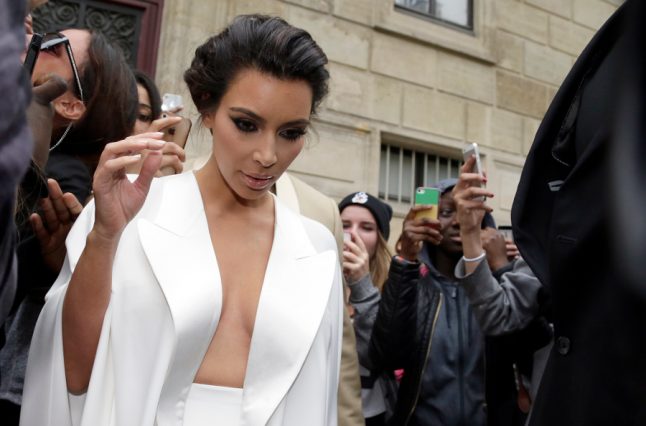 Photo: AFP
Officers organized the raids in the Paris region and the south of France after DNA was found at the luxury residence where Kardashian was tied up and robbed of her jewels at gunpoint, one source told AFP.
These raids led to a series of 17 arrests, with police also reportedly seizing €300,000 and documents.
Here's what we know so far about the suspects, who can be held for up to 96 hours before being charged, and most of whom already have records for organized crime.
“Major thug”: A police source told AFP that one of the DNA samples matched an individual known to police for robbery and criminal offences, who is considered “a major thug”.
“Grandad gangsters”: The oldest suspect being held is a 72-year-old man arrested after police broke open the gate of a pink walled villa in the Provencal city of Grasse. Others are said to be in their 60s, hence the name given to them in the French press as “Grandad gangsters” (Papys gangsters). The youngest is in his early 20s.
Not all men: Three women were among those arrested, including one aged 65 who was picked up in the southern region of Gard, according to a source close to the probe.
Kardashian's driver: A police official confirmed a news report on the M6 TV channel that Kardashian's driver at the time, who was an employee of a chauffeur company, was among those detained. His brother was arrested too, several channels have reported.
The 26-year-old driver reportedly tipped off the others that her bodyguard was absent and gave them details about her residence (seen in the picture above). The driver denies any involvement, reported Europe 1.
The “ringleader”: Police think the man behind the plan is a 60-year-old who was arrested in Vincennes (in the Paris suburb of Val-de-Marne).
Three groups: A police source told Express newspaper that the suspects include the robbers, those who took the jewellery afterwards, and the intermediaries who put the two groups in contact.
The heist, worth around €9 million ($9.5 million), was France's biggest jewellery theft involving a private citizen in more than two decades.
The thieves took a ring, pictured below, valued at $5 million.