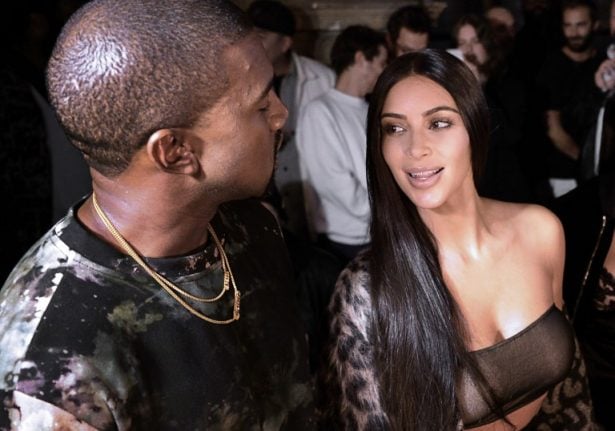 Police swooped in the Paris region and the south of France following the discovery of DNA at the luxury Paris residence where Kardashian was tied up and robbed of jewellery worth around nine million euros ($9.5 million) in October, one source said.

“One of the DNA samples matched an individual known to police for robbery and criminal offences, who is considered a major thug,” the source said.

Money and documents were also seized in the raids.

A gang of armed and masked men had burst into the residence in a chic area of the capital where 36-year-old Kardashian and her entourage were staying during fashion week.

The star was tied up and locked in the bathroom and the gang fled with jewellery including a ring worth around four million euros and a case of jewellery with a value of five million euros.

'Shoot me in the back'

Kardashian, who is married to rap mogul Kanye West, finally broke her silence about the incident this weekend, saying she feared she was going to be killed by the robbers.

“They're going to shoot me in the back,” Kardashian tells her sisters in a promotional clip for the new season of her hit TV show “Keeping Up with the Kardashians”.

“There's no way out. It makes me so upset to think about it,” she adds.

It is believed the men escaped on bicycles but one of the gang dropped a diamond pendant worth around 30,000 euros in the street outside.

It was found by a passer-by and handed in to police several hours after the robbery.

Kardashian lodged a formal complaint in France after she was filmed at the residence following the robbery.

Her lawyers said in October the video was made “without her consent or the police's and while the police were investigating the crime scene”.

Kardashian has harnessed the power of social media to rise to her fame, with nearly 50 million followers on Twitter and 90 million on Instagram.

A month after the Kardashian robbery, two Qatari women were held up on a motorway outside Paris and robbed of valuables worth more than five million euros.

The women, in their sixties, had just left Le Bourget airport northeast of the capital when their chauffeur-driven Bentley was held up by two masked men who sprayed them with tear gas, a police source said Tuesday.