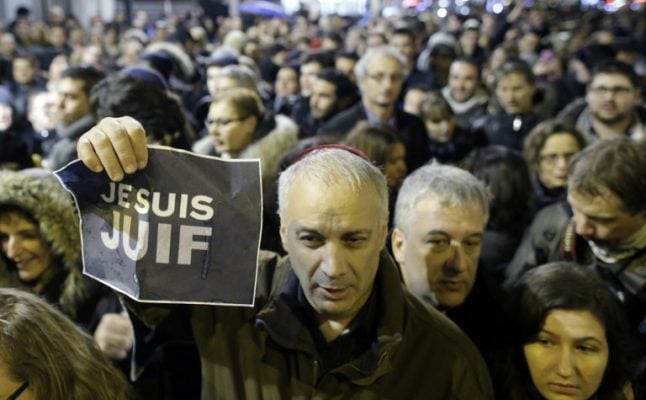 A man holds a sign reading "I am Jewish" during a demonstration after the Paris terror attacks two years ago. Photo: AFP
The Jewish Agency of Israel issued the update as France marked two years since attacks on the Charlie Hebdo magazine offices and on a Jewish supermarket in Paris, where four shoppers were shot dead.
Daniel Benhaim, who heads the Israeli-backed group in France, said that insecurity had been a “catalyst” for many Jews who were already thinking of leaving.
The 5,000 departures in 2016 add to the record 7,900 who left in 2015 and 7,231 in 2014. In total, 40,000 French Jews have emigrated since 2006, according to figures seen by AFP.
“The aliyah (the act of moving to Israel) of French Jews has been significant over the last decade,” Benhaim told AFP.
The French Jewish community is the biggest in Europe and is thought to number around 500,000 people.
It was shocked in 2006 by the kidnapping and brutal anti-Semitic killing of a young Jewish man, Ilan Halimi, in the Paris suburbs, which was followed by a shooting in a Jewish school in the southwest city of Toulouse in 2012.
A proportion of those who emigrate to Israel are known to return to their country of origin afterwards. Estimates range from 10 to 35 percent.
Experts and members of the Jewish community in France say that recent attacks are not the only reason people are leaving, with family, religious and economic reasons also playing a role.
France paid homage Monday to some of the victims of three days of violence in Paris in January 2015 that saw two Islamic extremists attack the Charlie Hebdo magazine,  killing 12 people, and the Hyper Cacher supermarket in eastern Paris.
Gunman Amedy Coulibaly killed four people after taking shoppers hostage at the Jewish store. He was later shot dead by anti-terror police when they stormed the premises.