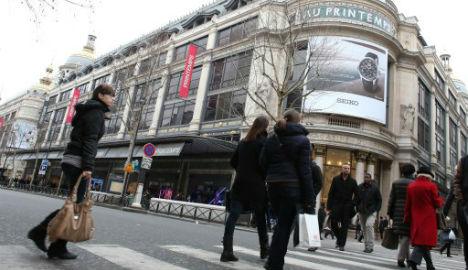 Shoppers pass buy Printemps, one of Paris's famed department stores. Photo:
President Francois Hollande's Socialist government has chipped away at France's laws preventing shops opening on Sunday.
Regional officials have received authority to allow stores to open more Sundays every year, but the major initiative was the creation of special international tourism zones where shops could operate on Sunday.
That was a particularly important move for Paris, a perennial favourite for tourists, but whose famous department stores and luxury boutiques lining Boulevard Haussmann and the Champs Elysees had to stay shut.
Implementation of the 2015 reform has been slowed down however as stores negotiated with unions on pay conditions. Working on Sundays remains controversial, although high unemployment and the higher wages on offer have helped to soften opposition.
Earlier this week, Printemps finally got enough union support for its wage package for Sunday openings, the last of Paris's major department stores to strike a deal. It plans to begin opening its doors on Sundays in a few months.
Galeries Lafayette, the other major department store based on Boulevard Haussmann and a particularly popular destination for cash-rich Chinese visitors, makes its first regular opening this Sunday.
Another high-end store, Le Bon Marche, also plans to begin Sunday shopping after reaching a deal with unions last year.
The flagship BHV store near Paris city hall was the first to strike an agreement with unions in November 2015 and has been opening its doors since July last year.
Six months later, “the results are extremely positive, with sales increasing by 10 percent since the Sunday openings,” BHV's management told AFP. That beat the forecast of a 6-8 percent gain that the store made when it began Sunday shopping.
“Since September, Sunday has become the second best sales day for BHV Marais, behind Saturday,” said Galeries Lafayette group, which owns the store.
And it isn't only tourists who are availing themselves of Sunday shopping hours. “There is undoubtedly a real appetite from the public, especially those who shop regularly in the adjacent streets in the Marais (neighbourhood where Sunday shopping has been allowed for several years under a separate exception)
to drop by BHV now as well,” said the company.
It also noted new clients visiting the store, both from the neighbourhood and the greater Paris region, who said they didn't have time to shop there other days of the week.
In terms of jobs, Sunday openings resulted in the addition of 150 full-time posts at BHV Marais.
At Galeries Lafayette, they've already recruited 330 people to handle the Sunday openings and the total is expected to rise. And that doesn't account for the staff at the in-shop boutiques that are employed by the brands directly. The store is targeting a 5 to 10 percent increase in sales.
The Sunday openings will help Galeries Lafayette, which like Printemps makes around half of their sales from foreign tourists, with this lucrative segment.
There are fears that many well-heeled tourists with cash to spend were preferring to spend Sundays in London or Madrid where they could shop. According to calculations by one retail trade association, the Galeries Lafayette and Printemps shops on Boulevard Haussmann alone were missing between 168 million and 240 million euros in sales per year by keeping their doors closed on Sunday.
The two stores are hoping for a repeat of the experience of the Beaugrenelle shopping centre, located near their Eiffel Tower, which saw a 28-percent jump in visits by tourists after it began to open on Sundays.
The Sunday openings will also help the department stores make the best of a bad situation.
Paris has been struggling to lure back tourists after the November 2015 terror attacks that killed 130 people.
Tourist arrivals to France overall were down 8.1 percent in the 10 months from January to October, and in the Paris area alone, tourism revenue is expected to plunge by 1.5 billion euros this year.
The MKG Group consultancy estimated that French hotels and their restaurants lost out on 900 million euros in revenue last year due to foreign tourists staying away, with Parisian hotels bearing nearly all of the brunt of
the shortfall.