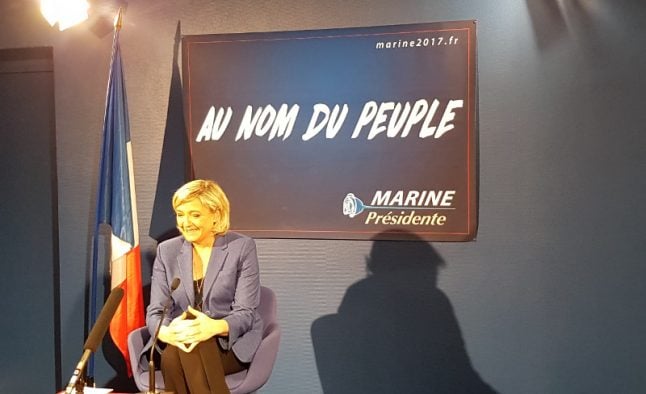 Le Pen, who polls suggest will at least make the second round run-off vote in this year’s presidential election, supported Donald Trump’s victory in the US election.

While she says she is “not accountable” for Trump’s internal policies in the US and has no plan to create a register for Muslims arriving in France, Le Pen does believe the controversial president elect will be good for France. “I do not calculate my policies based on those of Donald Trump,” Le Pen told international journalists with the Anglo American Press Association at her campaign HQ in Paris on Friday.

“I say very clearly that I am not responsible for the policies that Donald Trump is going to put in place in the United States.

“I was favourable for the election of Donald Trump because it seemed to me his foreign policy propositions were in the interests of France.

“The only thing that interests me is whether Donald Trump is going to take decisions on an international level that will have a negative impact on France.

Spot the difference. #MarineLePen posters inside and then outside her campaign HQ in Paris. @MLP_officiel A divisive figure let's say. pic.twitter.com/1JV9zsKPqN

“For the moment that’s not the case and in fact it’s the opposite.”

Le Pen pointed to Trump’s opposition to the proposed Transatlantic free trade deal (TAFTA) between the EU and the US, which she said would be “very negative for France”.

She also welcomed Trump’s desire for the United States to stop being the “world’s police force” and interfering in global conflicts that have harmful consequences.

Le Pen says she asks herself the same question of Putin, who she is a keen admirer of, just like Donald Trump.

“Will Putin make decisions that will weaken France or go against French interests? For the moment no,” she said.

“The only question I ask myself is whether it is good for France and the French people.”

Ever since Le Pen received a €9million loan from a Russian bank in 2014 she has been accused of cosying up with Putin, but she insists that as president she would be no one’s puppet.

Sketching her vision of a multipolar world, she said: “I am a totally free woman.”

“I am a totally free woman. I dont want a France that is submissive to the United States…. or Russia…” says #MarineLePen pic.twitter.com/eeNTGelDQ7

Le Pen has also long railed against against any kind of subjugation of France by the EU.

In the past she has spoken of her desire to “explode” the EU and make it fall flat on her face. She hailed the result of the Brexit referendum as a “victory for freedom” and quickly demanded France have a similar referendum.

But Le Pen has since appeared to soften her stance on a “Frexit”, telling journalists that before pushing for a referendum she would first enter into negotiations with the EU in a bid to return four fundamental sovereign powers to Paris: “territorial, economic, monetary and legislative”.

“Either I will have secured the return of those four sovereignties and I will advise the French to remain in a new Europe of nations, or I will not and then I will advise them to leave the EU.

“There is no question for me of betraying the people,” she said.

#MarineLePen doesnt like the euro. “The Euro isnt a currency. It's a political weapon. A knife stuck in the side of a country (About Greece)

The idea has echoes of David Cameron’s own botched attempts to try win back some powers from the EU before last year’s referendum. He failed dismally to convince the British public he had achieved his aims.

Le Pen however criticised Cameron for holding the referendum for his own strategic and electoral motives in other words to undermine the rise of the anti-EU UKIP party. Her motivations would be to win back sovereignty for France.

Despite Article 50 not yet having been triggered to mark the beginning of Britain's fraught exit from the EU Le Pen celebrated that despite the doomsayers there had been no “chaos” yet.

“Brexit referendum was a facade” says #MarineLePen. “David Cameron held it for his own electoral motivations…. to hurt UKIP” pic.twitter.com/YokF8bUj6A