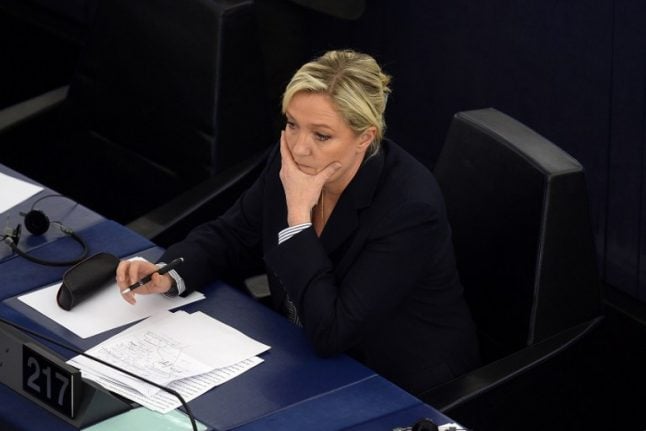 Marine Le Pen. Photo: AFP
FN leader Marine Le Pen — a leading candidate in upcoming presidential elections — ran into problems last October when the EU parliament called on her to reimburse €339,900 ($360,000).
She is suspected of violating the institution's rules by having two assistants carry out non-parliamentary work while their wages were paid by the EU assembly over the 2010-2016 period.
A similar case concerns her estranged 88-year-old father Jean-Marie Le Pen, who like her is a member of the European Parliament.
The EU is claiming the elder Le Pen should repay €320,000 paid to his parliamentary assistant for the 2009-2014 period.
Judicial sources said French prosecutors opened an investigation on December 15 after carrying out a preliminary inquiry launched in March 2015 at the request of the European Parliament, which had raised suspicions over payments to a total of 20 assistants working for National Front MEPs.
The investigation has been entrusted to examining magistrates specialising in financial crime for suspected breach of trust and concealment, organised fraud, use of fraudulent documents and undeclared labour, they said.
The probe will take place in the run-up to the French presidential elections, with the first round of the vote due on April 23.
If no candidate wins an absolute majority, a run-off between the top two will be held on May 7. Opinion polls suggest Francois Fillon of the conservative Republicans party would face Le Pen in the run-off.
Le Pen reacted angrily to the fraud probe on Thursday, portraying herself as a victim of political manipulation.
“Occurring in the middle of the election campaign… it is a clear sign of a purely political agenda. The age-old methods of politicking, of persecuting opponents, do not die away,” Le Pen told AFP.
The FN is hoping that last year's Brexit vote and Donald Trump's shock election victory will give it a historic boost for the presidential vote and parliamentary elections which follow in June.
The party was founded by the elder Le Pen but, in the eyes of many voters, he also tarred it with anti-semitism and racism.
His daughter, 48, has sought to pare away the negative image and broaden the party's appeal with a manifesto promoting nationalism, euro-skepticism and law and order.
Political commentators say Le Pen has little chance of winning the presidency, as electors are less likely to cast protest votes in a run-off.
A new opinion poll published by survey group Elabe on Thursday gives Fillon a lead of between one and four points over Le Pen in first-round voting intentions.
The lead depends on who the now-governing Socialist Party puts forward as its own candidate.