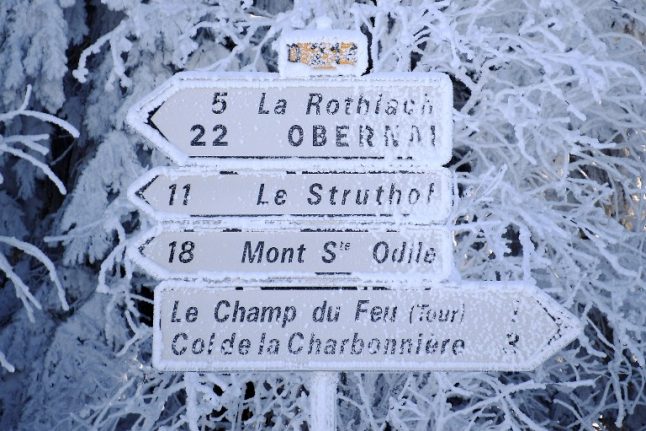 Photo: AFP
National weather agency Météo France increased the number of departments on orange alert to 20 on Friday afternoon.
The departments are: Aisne, Calvados, Eure, Eure-et-Loir, Nord, Oise, Orne, Pas-de-Calais, Paris and its inner suburbs, Seine-Maritime, Seine-et-Marne, Yvelines, Somme, Essonne, and Val-d'Oise.
On Friday afternoon, it added Ardelles and Marne. An orange alert is the agency's second most severe warning and urges the public to be vigilant.
The agency said that conditions would be “particularly troublesome on the roads”.
It urged motorists to pack enough equipment in their cars to keep warm in case they end up getting stuck in their vehicle for several hours.
Météo France added that Friday would be the coldest day of the week for most of France, and especially in the north east.
The reason? A cold front from Russia and Scandinavia has been passing through Europe (see tweet below).

“After a remarkably light New Year's Eve in northern Europe, the cold has increased markedly in the last few days,” the channel reported, leaving “a sudden drop in temperatures over most of the continent”.
Overnight, temperatures reached -20C in the eastern department of Jura, according to La Chaîne Météo.
Storm and tornado experts Keraunos recorded -17.6C overnight in eastern France, but noted that temperatures were even subzero in Corsica (see tweet below).

Throughout Friday, motorists in northern and eastern France have been warned to be careful of black ice on the roads.
The early afternoon will see mostly clear skies nationwide, but temperatures will be hovering around freezing point for the vast majority of the country (see map below). While the weather may seem particularly chilly, France has seen much, much colder spells at this time of year.
Météo France noted that in January 1963, temperatures reached -23C in central Lyon and -18C in southern Montpellier.
In January 1985, the city of Nice on the Mediterranean was hit by 38cm of now and temperatures of -5C.