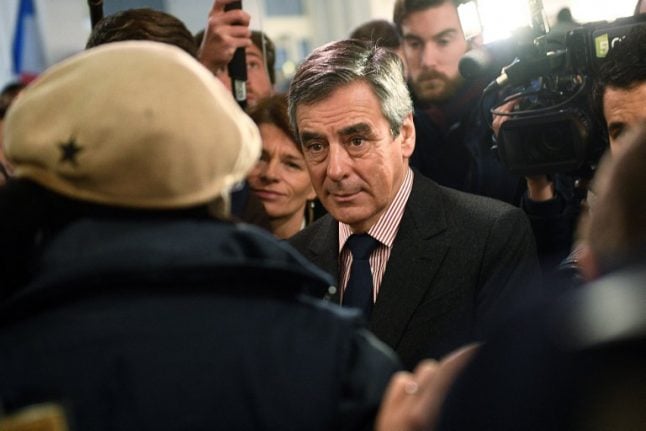 Photo: AFP
Fillon clinched the nomination for the rightwing Republicans party in November making clear his Catholic devotion, an anomaly in secular France that has strict rules on separating religion from public life.
The former prime minister invited new scrutiny after stressing earlier in the week during a TV interview that he was guided by the teachings of war-time leader Charles de Gaulle and his Christian faith.
“I am who I am, I'm open,” Fillon told French channel BFMTV on Friday from Las Vegas where he is visiting a technology show. “You have to be sincere and it's this sincerity which will be the mark of my political message,” he added.
A rival in the Republicans party, Henri Guaino, who is also hoping to run in this April's election, said he had been “profoundly shocked” by Fillon's words.
“It's a mistake and mistakes have consequences,” he said on Thursday, saying Fillon was treating Christians in France as a political constituency.
“The president of the Republic is the man who represents the nation. When you forget that, it doesn't work anymore,” he said.
Centrist independent Francois Bayrou, who is yet to decide whether to stand again, also condemned Fillon for mixing religion and politics in “this inappropriate way.”
“I've known Francois Fillon for a long time. I have never seen him make statements like this. It has to be linked to the elections in one way or another,” he said.
Fillon was talking on France's main TF1 channel on Tuesday when he was asked about his radical plans to reform the French social security system.
Some critics have accused him of wanting to smash the public safety net.
“I am a Gaullist and furthermore a Christian. It means that I will never take a decision that would run counter to the respect of human dignity, the respect of the individual and solidarity,” he replied.
A new online poll of around 900 people published on Thursday by the Elabe group showed the 62-year-old narrowly winning the first round of the presidential election in April, ahead of far-right candidate Marine Le Pen.
He is then tipped by pollsters to beat Le Pen from the National Front in a run-off vote two weeks later in May, but some analysts urge caution about the predictions after a highly unpredictable year in politics.