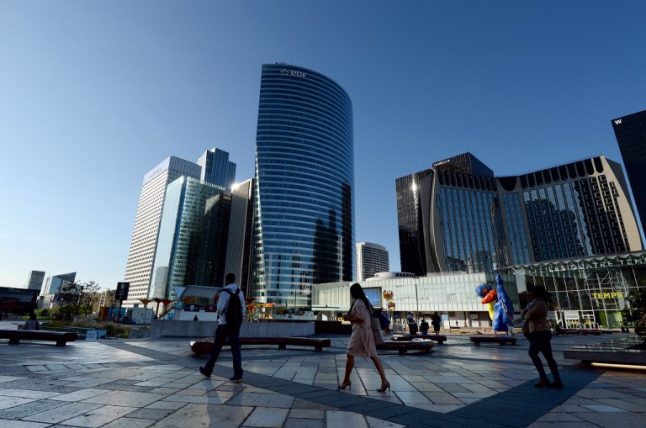 Workers at the La Defense business district to the west of Paris. Photo: AFP

Beatrice, a busy 50-year-old manager at an airline in Paris, sounds like she would benefit from France's new “right to disconnect” law that guarantees all employees freedom from their work smartphone and email.

“It often happens that I'm interrupted by urgent problems in my free time, or need to reply to emails out of hours,” she told AFP, asking for her real name and her company's not to be used.

“No one forces me to do it, but I get work email on my telephone and other managers have the same thing,” she added.

Since January 1, French companies with more than 50 employees must work up a charter defining employees' right to switch off. No sanctions are foreseen for non-compliance but an employee could sue for having their rights infringed.

The new labour law in a country famous for its tightly regulated workplace was prompted by the blurring of the boundary between work and private life by new technology and ways of working.

Requests from Beatrice's team of six intruded frequently into a recent holiday, meaning she couldn't switch off as she would have liked.

“I could have said 'I don't care', but then it puts other people in difficulty,” she confided.

While generally aware of potential health problems for employees, the company is trying hard to cut costs, she says. The result is senior managers want the same outcome with fewer people.

Yet others believe that it is not simply over-demanding bosses that are to blame for them checking mail during dinner or before going to bed, illustrating the difficulty of regulating how people work in their own time.

Some confess that their own work ethic and ambition spurs them on, or simply a lack of willpower to ignore unopened mail.

Mathilde, a 26-year-old employee of a cultural agency in the Opera area of central Paris, says she over-checks her messages due to curiosity rather than pressure.

“If there was an expectation (that I'd reply), then it would make me anxious,” she told AFP.

A hard-charging young banker who works on mergers and acquisitions says his employer cuts access to work email for his team from 10:00 pm to 6:00 am every night to prevent over-work.

“It's a choice whether you check your phone or not. Telling me I have to switch off pisses me off,” the 24-year-old admitted before striding off in his suit.

Peter Fleming, an expert on the workplace at the University of London, says many employees suffer from the “hard-work culture” of their companies, but also an “obsessive attachment to their work identity.”

“For many people, a job has moved from something we do and become something that we are,” he told AFP. “24/7 email really amplifies that trend.”

Company-wide policies on disconnecting — whether prompted by the law in France or by companies themselves elsewhere — are therefore welcome and in some cases necessary.

Fleming says the ambitious MBA business students at his university would be instinctively opposed to disconnecting out-of-hours because they would be worried about being judged harshly.

“It has to be collective, not individual. If I know that all my co-workers aren't connected, then I might not be too,” he said.

People working in the finance, technology, law or health professions are seen as particularly vulnerable to the risks of overload and burnout, but an increasing number of top companies are waking up to the risks.

It is no coincidence that telecom group Orange was asked to help draft France's “right to disconnect” legislation after a scandal over 35 suicides among its workforce in 2008-09.

Orange's 150,000 employees now benefit from a promise they will not be penalised for failing to check email out of the office. Everyone is discouraged from sending messages outside working hours.

Managers are being trained to understand that “if a boss sends an email in the middle of the weekend his employees will feel obliged to reply”, Barre said.

At the same time, no one is prevented from catching up on work at home and the rules contain flexibility for people who work remotely or unusual hours.

“If in my personal way of working it's more comfortable for me to finish something at the weekend, we can't ban it,” Barre explained.

“But I don't necessarily have to send the result of my work on Sunday night. It can wait until Monday morning.”

By the AFP's Adam Plowright