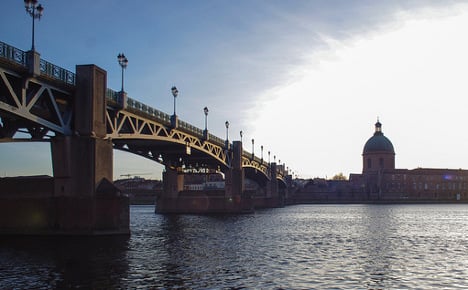 Photo: Jacme/Flickr
Toulouse, with around 1.2 million people in its metropolis, is the fourth biggest city in France (behind Paris, Lyon, and Marseille).
But while it may not be the biggest, it's certainly the best, or at least that's what the evidence seems to suggest to us.
A bold claim indeed, but we think we can convince you too. But first, a bit of background on the city. (AFP)
Known to locals as La Ville Rose (the Pink City) after the pink stone used in many of its buildings, Toulouse is a city on the move.
It has seen France's biggest economic growth in recent years (more on this below), boasts France's biggest population growth over the past 20 years, and was recently ranked as the second best place in the country to work after Bordeaux.
And it's a spectacular tourist destination with two Unesco heritage sites, the Canal du Midi and the Basilica of St. Sernin, the biggest Romanesque building in Europe.
According to the locals, it's an excellent place to call home (or even to visit for a weekend). Here's why.
1. Location, location, location
Nestled in south western France, those living in Toulouse are around an hour from the Mediterranean sea and the Atlantic ocean.
It's also within striking distance of the Pyrenées mountain range for those who like world-class hiking and skiing.
The locals take full advantage of the proximity to other options, and often desert the city for the weekends, says British translator in Toulouse Louise Lalaurie.
“There's often a big night on the Thursday then people head off. There's Biarritz, the Dordogne, Carcassone, Languedoc, and not to mention places like San Sebastian in Spain just across the border,” she tells The Local. 2. The local economy is growing faster than anywhere in France
The Ville Rose has seen the biggest economic growth in recent years, a new study has found, larger even than the country's capital.
The city recording a 31.6 percent increase in GDP per capita between 2003 and 2013, greater than any big city in the country.
We will let Jean-Luc Moudenc, the president of the Toulouse region explain why.
“Toulouse has had the highest population growth over the past 20 years, taking over from Montpellier,” he told BFM TV.
“Some 80 percent of this growth is from people coming from other regions in France, with around half of them coming from the Paris region.”
“These new arrivals come for highly skilled jobs and the attraction of the ecosystem that we have created here.”
Indeed, Toulouse offers a strong tech scene, is the home of plane manufacturer Airbus where 21,000 people work. (AFP)
3. Great for students
Boasting the world renowned University of Toulouse, the city ranked as the second best place in France to be a student this year (Grenoble was number one). It topped the same ranking the year before.
The city's 100,000 students enjoy some of the best employment opportunities in France and first-class local initiatives, the study noted.
And what's more, they get incredibly cheap public transport, says British student Amy Hares who just spent six months in the city.
“If you’re a student, you get to use unlimited transport for just €10 a month,” she said.
“Even better: If you’re on a work placement with a big company, they pay for 50 percent of your transport… This made my fee just €5.” (AFP)
4. Top spot to be a foreigner
In The Local's recent study on which French city was the best for foreigners, Toulouse finished fourth, one spot ahead of Paris (Rennes was first).
Toulouse performed particularly well in terms of its green space and air quality (and number of single people!)
There is a strong expat community, largely because of the big international student population and the number of jobs available for foreigners (more on this later), so you won't have to go far to find international friends.
A good place to start is the Toulouse Expats group on Facebook or the Toulouse Area English Speaking Forum. (AFP)
5. It's visually stunning
Eiffel Tower? Yawn. Toulouse can hold its head up high in the aesthetic stakes, with its pink buildings taking the breath from tourists and residents alike.
Louise Lalaurie, who has called Toulouse home for three years, says the old town is in a class of its own.
“The architecture in the old town is a bit like the Marais in Paris, but it's made of brick and not stone, which is quite comforting for a Brit,” she tells The Local.
She adds that the banks of the Garonne River that runs through the town are perfect for a stroll.
If culture if your thing, she recommends the art collection at the Fondation Bemberg or at the Musée des Abattoirs (art in a former slaughterhouse, and pictured below). (AFP)
6. The perfect size
Jean Louis Reynal, a pharmacist who calls Toulouse home, says it's the perfect size for a city.
“It's a big small city,” he tells The Local. “There are a lot of things to do and you can do them all.”
Indeed, with an inner city population of just 460,000 (compared to 2.2 million in Paris), Toulouse is easy to take in, as many tourists would attest to as well.
“You're never too far from anything that's going on, whether it's theatre, comedy, opera, or sports,” Reynal says.
7. Excellent transport
Not only is it ridiculously easy to get around the town thanks to the extensive bus system, but the city boasts some pretty nifty driverless Metro lines.
There's also the VélôToulouse bike scheme, similar to the Velibs in Paris (pictured below).
Trains out of the city can get locals to the Mediterranean beaches in no time at all, and the Blagnac airport, while perhaps difficult for some to pronounce, offers such a regular connection to Paris that it's among the busiest lines in the whole of Europe.
Oh, and the flight is often cheaper than a rail journey and only takes an hour. (AFP)
8. It's about to get even more connected
The city's airport will become even better connected from November, with the Pink City set to get more regular (and cheap) flights to the UK thanks to new lines from Ryanair and Flybe.
As well as several flight to the UK Toulouse airport has air links to much of Western Europe like Berlin, Rome and Madrid. Direct flights from Toulouse's Blagnac airport.
Perhaps even more excitingly, the city is going to benefit from the new high-speed TGV line between Paris and Bordeaux.
While a journey between Toulouse and Paris currently takes 5h25, it will be cut to 4h09 next year. (AFP)
9. Best accent in France
And lastly, while we accept that ranking an accent is an entirely subjective exercise, that doesn't mean the Toulouse natives aren't at the top of the pile.
In fact, in at least two separate surveys the “Toulousain” accent has come out on top as the best accent in the country.
A whopping 70 percent of respondents in one survey said it was “the most charming accent” in France.
Who wouldn't want to be surrounded by such pleasant sounding people?

Another version of this story was published in October 2016.