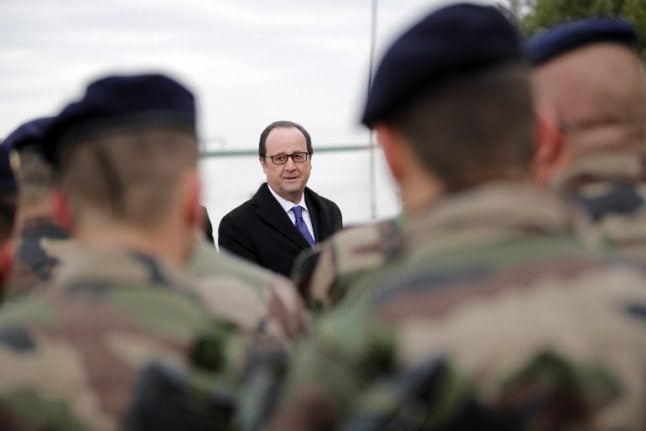 Hollande had already visited in 2014 and remains the most prominent head of state to come to Iraq since the launch two and half years ago of a US-led coalition against the jihadists.

The French president, who is travelling with Defence Minister Jean-Yves Le Drian, will also stop in the autonomous northern region of Kurdistan during his one-day visit.

“Taking action against terrorism here in Iraq is also preventing acts of terrorism on our own soil,” he said at a base of Iraq's elite Counter-Terrorism Service near Baghdad.

France is the second contributor to the US-led coalition that has carried out thousands of air strikes against IS in Iraq and Syria and provided military equipment, training and advice to Iraqi forces.

Iraqi forces completely collapsed when IS jihadists took over second city Mosul in June 2014 and swept across much of the country's Sunni Arab heartland.

The jihadists then gained more territory in August 2014, forcing hundreds of thousands of people to flee from areas that had been controlled by the Kurdish peshmerga forces.

Since it joined the United States in the coalition in September 2014, French aircraft have conducted 5,700 sorties, around 1,000 strikes and destroyed more than 1,700 targets, according to defence ministry figures.

France has 14 Rafale fighter jets that are stationed in Jordan and the United Arab Emirates and taking part in coalition operations.

It also has 500 soldiers training and advising elite Iraqi forces and CAESAR artillery vehicles stationed south of Mosul to provide support for ongoing operations to retake the city.

Australia, Italy and Britain are also part of the 60-member coalition supporting Iraq's efforts against IS.

French nationals are also among the largest contingents of foreign fighters in IS and security agencies now fear the disintegration of the “caliphate” in Iraq and Syria will result in an influx of returning jihadists bent on carrying out terror attacks in their home countries.

Hollande is also expected to voice support for reconciliation and unity in Iraq, where observers fear an end to major operations against IS could see oldinternal divisions resurface.

“He will stress the importance of continuing efforts to ensure sustainable security in the country after Daesh (IS) has been defeated and the coexistence of communities in a united and sovereign Iraq,” a source in the French presidency said.

Hollande was scheduled to hold talks with Prime Minister Haider al-Abadi, who hails from the main Shiite political bloc, President Fuad Masum, a Kurd, and parliament speaker Salim al-Juburi, one of the country's most prominent Sunni politicians.

The French president began his trip with a visit to a base near Baghdad where French forces are training Iraq's elite Counter-Terrorism Service, the force that has spearheaded most major anti-IS operations in Iraq since 2014.

It was CTS that first breached the city limits of Mosul late last year in an effort to retake what is now IS's last major stronghold in Iraq.

But the going has been tough for Iraqi forces, partly because hundreds of thousands of civilians have remained in the city, slowing their advance.

Abadi had promised that his forces would rid the country of IS by the end of 2016 but he said last week that three more months would be needed to achieve that goal.

Some observers argue that remained an ambitious timeline, given the continued presence of IS fighters in other parts of the country, such as in Hawijah or in the province of Anbar near the Syrian border.