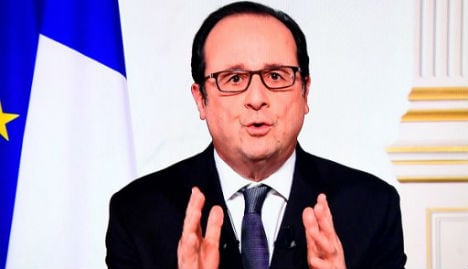 This will be Francois Hollande's last New Year's appearance as President. Photo: Olivier MORIN / AFP
“We are not yet finished with the scourge of terrorism. We must continue to fight it abroad — that's the reason for our military operations in Mali, Syria and Iraq, where I will travel the day after tomorrow to greet our troops,” Hollande said.
France has around 500 troops fighting alongside coalition forces in Iraq, backed by Rafale fighter jets.
In the last New Year message of his presidency, Hollande paid tribute to those killed in terror attacks in France this year, including the 86 mown down in the Bastille Day attack in Nice and smaller-scale attacks on a priest and two police officers.
The fight against terrorism is also domestic, stressed Hollande, citing efforts to foil attempted attacks, closely watching “dangerous individuals” and fighting against radical extremism.
“I know that you are worried about the terrorist threat which has not diminished as shown by what happened in Berlin,” where a Tunisian jihadist smashed a truck into a Christmas market on December 19, killing 11 people and
also shooting dead the lorry's registered driver.
This was Hollande's last New Year appearance after he announced earlier this month he would not stand for re-election in presidential polls next year.