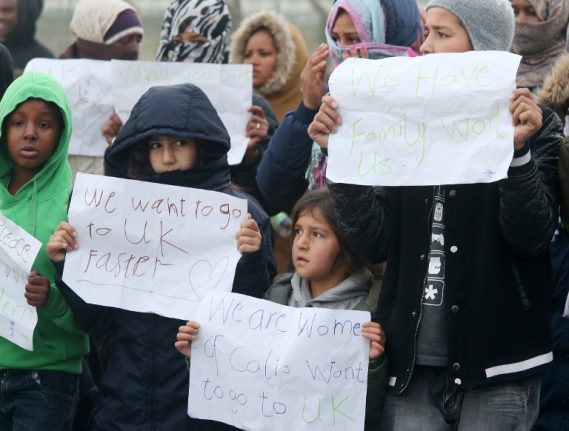 They accuse interior minister Amber Rudd of breaking the government's commitment to welcome vulnerable minors under section 67 of the Immigration Act, known as the Dubs amendment.

The case is being brought by 28 children who had their applications refused and another eight who are awaiting decisions, according to the Guardian newspaper.

“The substantive legal challenge was brought on 23 December,” a spokesman from Duncan Lewis Solicitors told AFP on Thursday.

Facing a political storm over its response to the refugee crisis, the government agreed in April to allow some vulnerable children to come to Britain from the refugee camp, at its discretion.

Lawyers argue that the interior ministry had failed to give proper written decisions in refusing applications and had not used its discretion due to the imposition of a strict set of rules determining who is eligible to stay.

Under the rules, a child must be either 12 or under and at high risk of sexual exploitation, or be 15 or under and either of Syrian or Sudanese nationality before they are considered.

“The government has rendered these children, including some as young as 13, to effectively be without any legal remedy until well into the new year,” Toufique Hossain of Duncan Lewis told the Guardian.

Alf Dubs, a Labour member of the House of Lords who pressured the government into making the commitment, told the Press Association that the criteria “breached both the letter and the spirit of the amendment.”

“I think they have gone back on their word,” said Dubs, who was himself brought to London as a Jewish child refugee fleeing Nazi troops in 1939.

The children involved in the case lived at the squalid camp in Calais before it was cleared in October.

They were interviewed by British government representatives over the last two months before receiving the refusal of their applications on December 15 and 16, according to Duncan Lewis.

The interior ministry says more than 750 children have arrived in Britain from the camp this year.