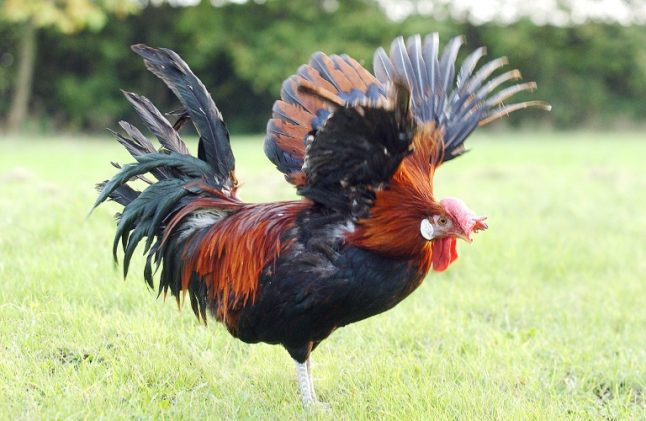 The French are proud; the emblem of France is the cockerel. Photo: AFP

France is a gobstoppingly beautiful country, with fabulous geographic and climatic diversity, a rich culture and history, and gastronomy and wine to die for, says Joanna Munro.

But the most fascinating about the country, she adds, is the French themselves.

Here are ten things she loves about them.

The French dictionary has two different words for pride: fierté and orgueil. Whereas the word fierté describes noble pride, orgueil is defined as both the more arrogant pride that can come before a fall and “a justified feeling of pride,” thus making it defendable to be full of yourself. The French therefore unabashedly display both variations.

The emblem of France is the cockerel: the king of the farmyard, which comedian Coluche points out is the only bird that still manages to sing with its feet in la merde. Whatever happens, the French will always crow for their country. 2. They take their health extremely seriously

The French medical system is one of the best in the world, and many taxpayers not only recoup their investment in the system, but enthusiastically dig a deep hole beneath the sécurité sociale. The slightest sniffle is immediately taken to be inspected by the doctor, who is generally referred to using the possessive: “My doctor…”  A long list of potions and lotions is promptly drawn up, including the dreaded suppository.

They even take the names of diseases seriously, I've heard the common cold referred to as “rhinopharyngitis”. At first I thought they did it to make themselves sound iller than they were, but it’s not that at all. For the French, health is a serious matter. 3. They have a love/hate relationship with junk food

Unbeknown to the rest of the world, who are convinced that the France is to gastronomy what George Clooney is to sex appeal, French consumers happily chuck increasing amounts of frozen meals, microwaveable chips and processed cheese into their shopping trolley along with their magret de canard and filet mignon.

They loudly deplore what they call “la mal bouffe”, yet they can’t resist the stuff. When you catch them red-handed, they explain, “We only come here for the kids,” before tucking with gusto into a double cholesterol and fries courtesy of the scary, big-footed clown in stripy socks. The French have an impressive revolutionary strand in their DNA. When President Sarkozy was ousted for President Hollande, the French filled the streets and proudly waved their fists in the air for political and social change. Then Hollande and his team started implementing their electoral promises, and France promptly set about what it does best: demonstrating. I have come to the conclusion that the French simply don’t like being told what to do, whoever they put in charge. I am in awe of the average French woman, who is the hostess with the mostest. Turn up at the door to say hello, and you will see her assemble enough seating for an army battalion, pull a meal out of nowhere and serve up dinner for twenty in the bat of an eyelid.

French women appear to be born pre-programmed with a Paul Bocuse recipe database and Martha Stewart’s organisational skills, and are never flapped by the surprise arrival of visitors. They just whisk a tart as big as a tennis court out of a bottomless fridge, and defrost a boeuf bourgignon that they’d cooked up in their spare time – “just in case.” The French have a fabulous capacity to invent words that sound and look English, but bear no resemblance whatsoever to the things they are describing. When an English speaker asks for an explanation, he or she is looked at with furrowed brows and told with an injured or amused expression that “eet eez Eengleesh”.

My favourites are le lifting (a facelift) le relooking (a makeover), le sweat (pronounced “sweet”: a sweatshirt), le jogging (either a tracksuit or a jog), and “les warnings” (pronounced  “varnings”: hazard warning lights).

READ ALSO: The best re-invented “-ing” words from the French 7. They have mastered 'rude politeness'

The French have a fascinating habit of being rude via the dexterous overuse of deferential language. I recently saw a heated exchange that ended with an official telling a man that “Môôôôsieur must do this” and “Môôôsieur must do that.”

Indeed, the most qualified users of this technique can actually speak to people in the third person, hence implying that as far as they are concerned, the other person simply isn’t there. All this over-the-top politeness actually results in a infuriatingly condescending attitude that puts you in a position of inferiority, but you can’t complain: they are being polite.

Going to the market in our village is a sensorial fiesta. It’s not just the smell of the roast meat and cheese, the winter sun bathing the cheerful colours of the market, and the bubbling sound of conversation and laughter.

It’s also the physical proximity and contact. Every time I arrive home, I feel like I have been to a massage parlour – once the obligatory handshake or noisy cheek-kissing has been accomplished, all conversation is punctuated by poking, prodding and squeezing the other person as if they were an overripe piece of fruit. 9. They have their own take on English-language music

Some French singers give themselves English stage names, pronounced with a heavy French accent. It took me a while to work out that Johnny Halliday (pronounced Djonny Alliday and pictured below) was actually French.

I am always amused to hear the French singing along to English songs. Particularly when they don’t know that the lyrics are highly inappropriate and are sung by teenagers wearing headphones in the bus as the granny across the aisle grins and taps along in time with her feet. 10. They have a great sense of humour… I hope

Last but not least, I love their sense of humour and their ability not to take this kind of article too personally, with what they call “le flegme britannique” (this has nothing to do with phlegm, but designates stoic British composure). At least, I hope so…

By Joanna Munro, who runs the Multifarious Meanderings blog from Montpellier, and who has called France home for just over 25 years.