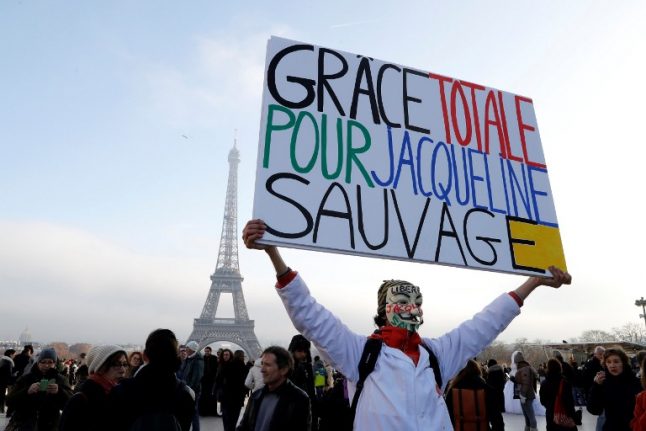 A protester attends a demonstration to call for the release of Jacqueline Sauvage. File photo: AFP

Hollande “considered that Mme (Jacqueline) Sauvage's place was no longer in prison but with her family,” the president's office said in a statement.

The case, which has seen many twists and turns since Sauvage, who is in her late 60s, shot her husband Norbert Marot three times in the back a day after their son hanged himself in 2012, is a cause celebre in France.

Hollande accorded Sauvage a partial pardon in January this year for killing Marot, a violent alcoholic who she said raped her and her daughters.

But the pardon reduced her prison sentence rather than commuting it, and in August a French court refused to release Sauvage, who has become a symbol of the suffering of domestic abuse victims in France.

One of her lawyers, Nathalie Tomasini, said she was “overcome by joy and emotion” over Hollande's pardon.

The French president's power to commute or suspend prison terms was enshrined in the constitution in 1958.

Under a 2008 reform, the president may no longer decree blanket pardons, just individual ones.