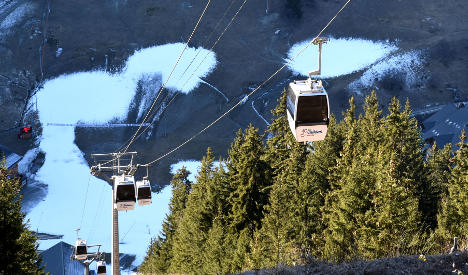 Thanks to unseasonably high temperatures, some resorts, particularly those in mid-mountain locations, have not seen a flake of snow for almost a month.

Sandra Larue, a weather expert, told BFMTV that December 2016 could end up being the “calmest” on record due to a “blocking anticyclone”, which can lead to long periods of stable weather.

The resorts worst affected are in the Massif Central, in central-southern France, and The Vosges and The Jura, in the east, where slopes are completely bare. The Chalmazel ski season in Massif Central, as seen from the webcam on Wednesday.

There has also been hardly any snow in resorts in the south-western Pyrenées mountain range.

While more snow has fallen in the Alps, skiers must climb high to find it.

“It's generally a little better in the Alps, notably in the north and above 2,500 metres, in Haute-Maurienne and Haute-Tarentaise,” added Larue.

“This is snow which fell in November. The situation is also a little better in the southern Alps, notably between Devoluy and Parpaillion, and closer to  the border, notably the Mercantour mountains, where snowfall has almost been excellent.” Capcir in the Pyrenées, today.

While it's been a lacklustre start to the season for most resorts, those trying to attract visitors in areas where it has still been possible to ski have bemoaned the publicity surrounding the poor conditions.

“It hasn't been an easy year for some sites,” said François Veauléger, the director of tourism in Montgenève, in the higher Alps.

“It's this globalization which is very complicated at the moment. But when you hear 'there is no snow in the Alps', it's very hard because sites do have it, and make every effort, working through the night, to ensure that conditions are good enough for holidaymakers then next day. It's simply unjust to then read that there isn't any snow.”

But his words are of little comfort to some of the 45,000 seasonal staff still waiting to start work.

“No snow, no work,” Fanny, who was supposed to start work at a ski station in Albiez, in the lower Alps, ten days ago, told Europe1.

Karine Pellissier, who runs a crêperie at the bottom of a ski run at the resort, said she hasn't been able to hire a full team of staff due to less custom.

“Usually, by this time, I have three people working full-time. Right now, I have two, and they're doing half the number of hours. It puts their season in danger.” It looks like they'll have to wait until the new year to see signs of improvement.

“From Thursday, the anticyclone is expected to shift a little towards central Europe, but in general the last week of the year looks anticyclonic,” said Larue.

“There'll be lots of sunshine until Sunday, then the cooler air could arrive on Monday.”