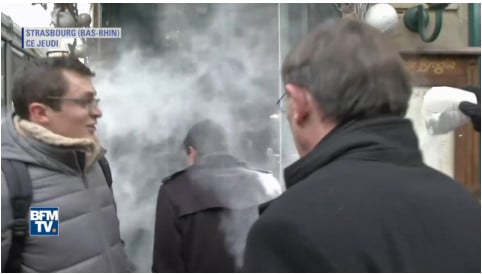 Former PM Valls was visiting Strasbourg to discuss the security arrangements around the Christmas market, but he might have to look at his own security organisation after he was hit by a flour bomb thrown by a protester.

Valls who recently left the government to run for president, was about to enter a cafe when the protester, believed to be a young man in his 30s came up behind him and threw flour over him, images from BFM TV showed.

The protester shouted the words :”49:3 we won't forget it,” in reference to the controversial clause used by Valls to force two unpopular bills through parliament without a vote from MPs.

The man was quickly rushed away from the scene by police officers.

For his part, Valls reportedly brushed himself down and carried on his visit.

The PM stoked more controversy recently by suggesting he would scrap the 49:3 clause if he became president, despite having used it to force two bills, including the controversial labour reforms, into law when he was prime minister.

Valls quit as prime minister earlier this month in order to concentrate on running for the presidency.

He faces a Socialist party primary election in January, which he is favourite to win, but polls suggest he would lose out in the first round of the presidential election next April.

Valls, who is on the right of the Socialist party has not proved popular with those on the left of his party, who see him as too authoritarian and pro-business.