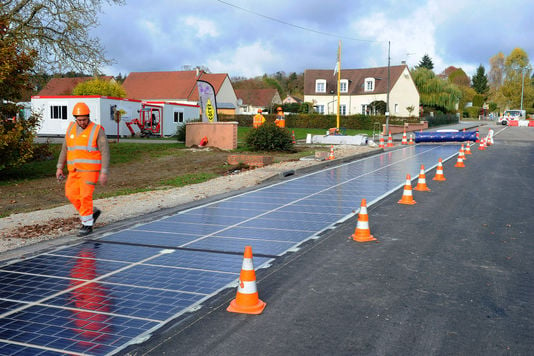 France's Ecology Minister Segolene Royal headed to the little known village of Tourouvre in the department of Orne in Normandy on Thursday to officially open the world's first solar panel road.

The road, named a “Wattway” is made up of 2,800 square metres of solar panels stretching along one kilometre that cost some €5 million to construct, which was covered by a grant from the state.

“This new use of solar energy takes advantage of large swathes of road infrastructure already in use… to produce electricity without taking up new real estate,” Royal said in a statement.

From now on, or at least for the next two years while testing is carried out,  the 2,000 motorists who use the RD5 road each day will pass over the specially protected panels stuck to the road.

The road is still part of a test phase to see whether it can provide energy but if all goes to plan the panels should be able to produce enough electricity to power the street lighting in the village of 5,000 inhabitants.

The project is being managed by Colas, a subsidiary of French company Bouygues. It comes after the concept of a solar road was tested at four different sites – mainly car parks,  around France, including two in the Vendee department and two others near Marseille and Paris.

The minister announced a four-year “plan for the national deployment of solar highways” with initial projects in western Brittany and southern Marseille. The idea, which is also under exploration in Germany, the Netherlands and the United States, is that roadways are occupied by cars only around 20 percent of the time, providing vast expanses of surface to soak up the sun's rays.

With one million kilometres of roads around France, Colas says the country could in theory become energy independent thanks to the solar panels.

One of the downsides is that solar panels placed flat on roads produce less electricity that those place at an incline, on the roofs of houses for example. Detractors also doubt whether the panels will resist the elements as well as the heavy trucks that will test their sturdiness.

And the cost question is far from being resolved. Each kilowatt-peak — the unit of measure for solar energy — generated by Wattway currently costs 17 euros, compared with 1.30 euros for a major rooftop installation.

But Colas hopes to make the cost competitive by 2020, noting that the cost of producing solar energy decreased by 60 percent between 2009 and 2015 according to a French renewable energy association, SER.

Perhaps Normandy is not the best region of France to test the effectiveness of solar panels. Figures show that the Normandy town of Caen gets 44 days of “strong sunshine” per year, compared to 170 in Marseille.

The residents of Tourouvre will be the first to find out.