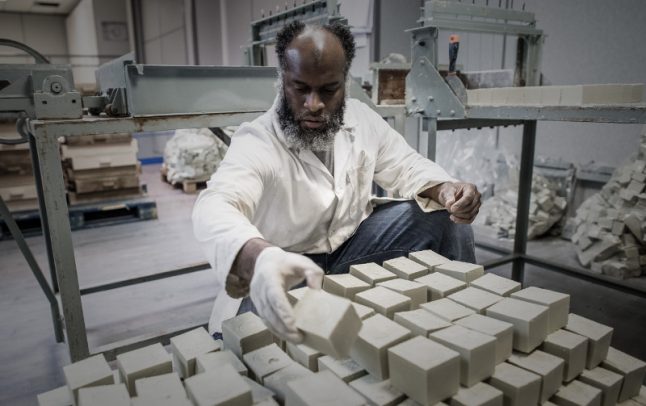 A collateral victim of the Syrian war, Aleppo soap has found a sanctuary far from the ruined city whose elegant souks, many now reduced to rubble, have made the coveted green bars for centuries.

In an industrial zone on the outskirts of Paris, a Syrian master soapmaker is carrying on the tradition, mixing olive oil and laurel oil with water and lye to produce a deeply moisturising natural cleanser that has won devotees worldwide.

The scent of laurel oil wafts through the corridors of the factory in Santeny, about 30 kilometres (18 miles) southeast of the French capital, where big blocks of soap are drying.

Constantini, a trained doctor, began importing soap from Syria's historic second city in 2004 and later began producing the soap under the “Alepia” brand.

His plan had been to open a soap factory on the outskirts of Aleppo with Harastani, a master of the art who learnt the trade from his father.

But Syria's brutal civil war, which has made a smouldering ruin of much of Aleppo, laid waste to his plans.

Harastani and his family fled the fierce fighting that turned the city into a global symbol of suffering.

“We could no longer go to the factory because of the shelling and kidnappings,” he said.

With all but one or two of around 50 soap factories destroyed in Aleppo, Constantini and Harastini decided to start producing the soap on French soil.

“We left our country, our houses, our businesses, our friends,” Constantini says, counting off his losses with a sigh.

“I used to have lots of customers, in Syria but also abroad, in France, Italy, Germany, the Gulf countries, South Korea, Japan, China,” he says.

“I was an ordinary person who loved his work and his family… It's the only profession I've known for over 35 years.” On arriving in France, he resumed his trade, 4,000 kilometres from home.

Constantini is adamant that the Made in France soap is still essentially Syrian.

“If a top French chef opens a French restaurant in New York it remains French cuisine, not New York cuisine. It's the same for the soap. It is made by the master soapmaker Harastani and is, therefore, proper Aleppo soap,” he argues.

The entire soapmaking process — from the selection and mixing of the oils and lye through to the drying and cutting — is carried out according to family recipes dating back more than 3,000 years.

“I am very proud to carry on this tradition,” says Constantini. “The know-how is not being lost. It will endure despite what is happening in Syria.”

The nearly six-year war came to a head in the eastern part of Aleppo last week, as thousands of hungry, terrified residents began being bussed out of the city after weeks of bombings.

For Constantini the war has mushroomed into a “world war” pitting global powers against each other in a scorched-earth battle for control of the Middle East.

With no immediate end to the fighting in sight, he says the best thing he can do is “continue making this soap and hope that peace will return.”

Harastani says he does not know what the future holds but is “not so pessimistic”.

One thing is certain, he says. “We will return to Syria someday.”