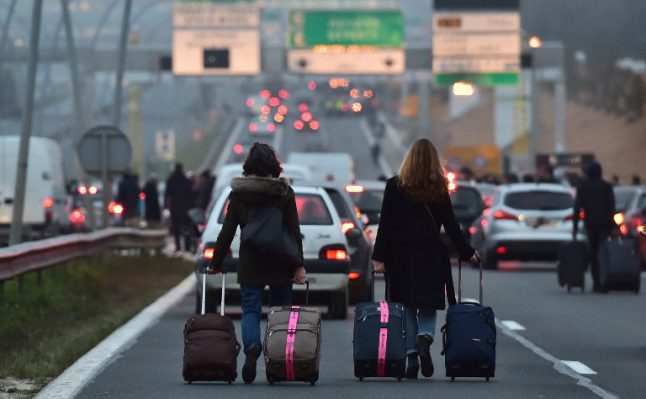 Air passengers walk to the airport in Paris after a recent blockade by Uber drivers. Photo: AFP
Drivers using the taxi app Uber and other minicab (VTC) firms in Paris plan to protest at Orly and Charles de Gaulle airports from 4am on Friday.
The call to action comes following this week's failed negotiations between unions and bosses from ride-sharing app Uber.
The unions have been at loggerheads with Uber over the past week after a recent move by US ride-hailing giant to raise the commission it charged drivers for each ride from 20 percent to 25 percent.
Drivers' unions had demanded Uber either lower the commission or raise prices, but those demands have not been met.
Uber's drivers, and the cabbies behind other similar app-based car services competing with traditional licensed taxi firms, say the US company is bypassing national labour protection standards while ignoring collective negotiation with its freelance drivers.
French Transport Minister Alain Videlies urged Uber last week to enter into discussions with all trade unions. While the American company announced plans to pump €2 million into a support programme for hard-up drivers, unions said the move wasn't good enough.
Their planned protest follows similar action on Thursday last week that saw tailbacks at both airports and Porte Maillot on the city's western edge.
Some airport-bound passengers were left with no choice but to finish their journey on foot. There were numerous reports of non-striking drivers being attacked by protesters and there are fears Friday's protests could also turn ugly.
Protesters said at the time that they were earning as little as €3.75 an hour.
Some held signs reading “Uber scam” and “Uber social scam” and “Uber = Modern slavery”.