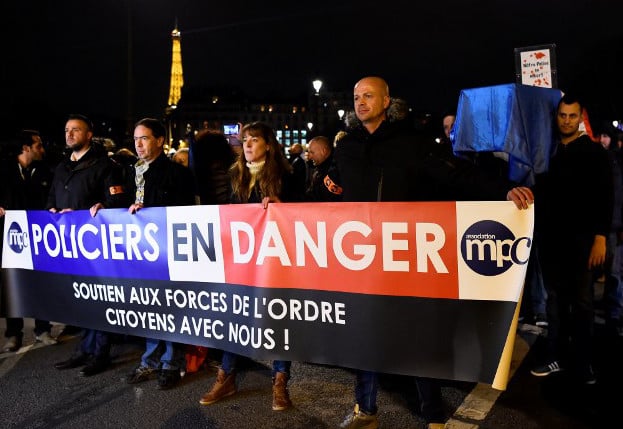 The new rules have been drawn up after several weeks of police protests across France and also to account for the heightened threat against officers from terrorists but also violent criminals.

The new law, which looks set to be rushed through parliament, will slightly loosen the rules around “legitimate defense” which officers must abide by when they use their weapon.

Currently officers have to respect three principles when pulling out their gun.

Firstly the threat must be real, meaning the danger to the policeman’s life or that of a third person must be “certain” or “very likely”.

Secondly the arm must be used immediately, meaning at the moment of the attack.

And thirdly the response has to be proportional to the gravity of threat they are facing meaning if they are physically attacked by an unarmed person, then using their weapon to respond would be against the law.

Police however have long demanded their powers are extended to match those of the gendarmes military police, who have greater flexibility when it comes to using their weapons.

Gendarmes are able to open fire when attacked by armed individuals to “defend” an area that they occupy, but only after repeated warnings to their attacker have been ineffective.

They are also able to open fire to immobilize vehicles whose drivers are refusing to stop.

(AFP. Police protest on the Champs-Elysées to raise awareness at the violence they face.)

If the law is passed then police will get similar powers to fire on drivers hurtling at them, a move aimed to respond to the current terror threat, which has seen trucks used in attacks in Nice and Berlin.

French soldiers and police have also been targeted in a similar way in France in recent years.

They would also be able to fire on someone in their custody who is proving obstructive (recalcitrant), also only after warnings have been ignored.

A law passed through parliament in July this year gave police the right to open fire during a mass terror attack, like those committed in Paris in January and November 2015.

The bill will also allow police officers to maintain anonymity in court proceedings, which was another demand made by police during protests in October.

Police in France have said they are at breaking point with the country having been in a state of emergency for over a year following jihadist terror attacks in Paris last November.

The pressure they are under has been exacerbated by recent incidents of violence against officers, notably in Viry-Chatillon near Paris this month when four officers came under attack from youths hurling petrol bombs.