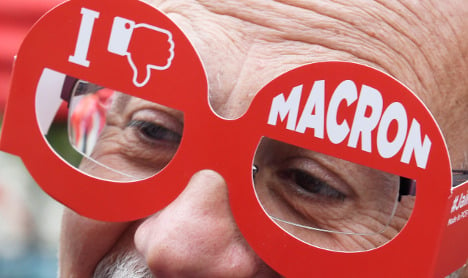 Former Economy Minister Emmanuel Macron, who recently named himself as a candidate for next year’s battle for the Elysée Palace, came out on top.

Macron, a rising star who jumped ship from the Socialist government in August to launch his political movement En Marche! (On the Move), picked up 35 percent of the vote in the Odoxa poll carried out for French media.

He came in ahead of François Fillon, who after winning the right wing primary last month, has been installed as favourite to win next year’s presidential election.

Fillon picked up 31 percent of the vote, slightly less than the 33 percent score achieved by Alain Juppé, the man he defeated in the primary.

Although Fillon’s victory was impressive it appears the exposure has won him a few enemies too as he as dropped six percentage points from the results of a similar poll carried out earlier in the year.

Former Prime Minister Manuel Valls, who stepped down earlier this month from his post as head of François Hollande’s government, scored 21 percent.

Other Socialist party candidates in next month’s primary scored less well. Arnaud Montebourg’s approval ratings were 20 percent and Benoit Hamon was on 14 percent.

For his part Hollande was regarded favourably by 18 percent of the French public although that seemingly high score for the president may partly be due to the fact he has decided to step down.

There is a growing belief that that the run-off vote on May 7th could actually see outsider Macron square up against Le Pen the National Front leader who used to be considered as the outsider.

While Le Pen’s popularity has grown steadily in recent years, Macron has enjoyed a fairly meteoric rise over the last two years.

He is confident he could provoke an upset next spring and his more established rivals.

When he announced his presidential bid last month Macron said he wanted to “pull France into the 21st century”.