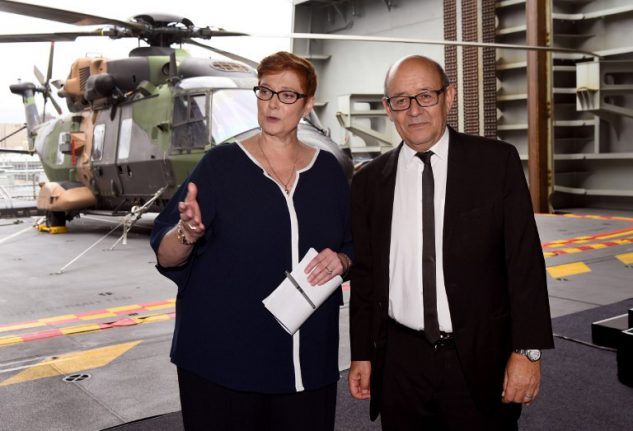 France's Minister of Defence Jean-Yves Le Drian (R) and his Australian counterpart Marise Payne. Photo: AFP
Prime Minister Malcolm Turnbull and France's Minister of Defence, Jean-Yves Le Drian, will ink the inter-governmental accord in Adelaide with the French shipbuilder DCNS designing and building the Shortfin Barracudas.
Defence Minister Marise Payne said in Sydney the fleet of subs was the “largest defence procurement programme in Australia's history”.
The overall cost of the submarine fleet, which includes separate agreements with US and Australian contractors, totals Aus$50 billion (US$37 billion).
The new contract, which will be signed Tuesday, will lay out the “legal framework under which Australia and France will partner on the future submarine programme over the coming decades”.
She added that it was “a critical milestone in delivering the regionally superior fleet of submarines”.
Australia awarded DCNS the main contract in April to design and build its next generation of submarines, beating off competition from Germany and Japan.
The vessels will be a scaled-down, conventionally powered version of France's 4,700-tonne nuclear-fuelled Barracuda but boast the same stealth capabilities.
Design and mobilisation work has already been launched with Australian experts working in Cherbourg while DCNS will open new offices in Adelaide on Tuesday employing up to 300 engineers.
With Canberra insisting all the subs be built domestically, Payne said 2,800 jobs would be linked to the overall Shortfin Barracuda programme in Australia, with the first vessel expected to be ready by around 2030.
French officials expect 3,000 to 4,000 direct and indirect French jobs to come from Canberra's agreement with DCNS, which suffered a major leak of secret data on Scorpene subs designed for the Indian navy last August.
Australia has rebuffed any security concerns and Le Drian said that a judicial investigation into the leaks was underway in France.
“Security priorities are embedded,” in the sub programme, Payne said.
The leak was “intended to harm France”, Le Drian added, noting the two countries had signed an agreement on handling classified information in Paris on December 8.
The Barracudas are to replace Australia's ageing diesel and electric-powered Collins submarines.
But Payne would not detail the speed and range of the new vessels, saying only that they would be “regionally superior” and better than the Collins class subs they replace.
US defence contractor Lockheed Martin was named in September to fit the combat systems for the Barracudas.