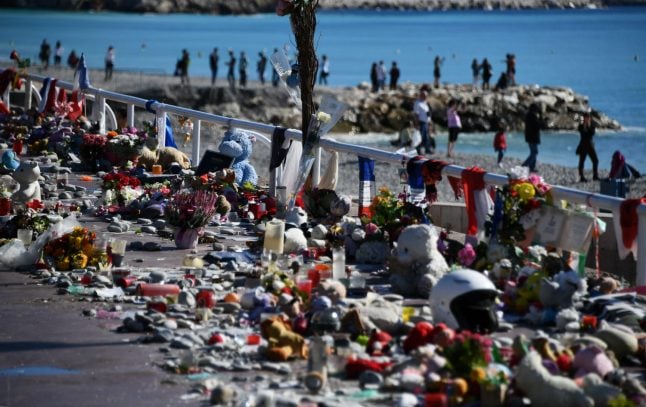 Commemoration to victims at the Promenade des Anglais in Nice on October 15, 2016. Photo: Anne-Christine Poujoulat/AFP
The three, who were among 11 arrested on Monday in Nice and the western city of Nantes, were remanded into custody on Friday, said the source. The other eight have been released.
The three, aged 24, 31 and 36, were charged in relation to a terrorist plot.
The arrests come five months after Tunisian extremist Mohamed Lahouaiej Bouhlel ploughed a 19-tonne truck into a crowd on the Nice seafront, further traumatising a country reeling from a series of jihadist attacks.
The victims from 19 different countries were watching a fireworks display on July 14, the Bastille Day public holiday. Over 400 people were injured.
Six people have already been charged so far over alleged links to the 31-year-old killer but investigators have yet to prove that any of them knew what he was planning.
They include an Albanian couple, Artan Henaj and Enkeledja Zace, and a French-Tunisian national, 21-year-old Ramzi Arefa, suspected of providing a pistol to the killer while not necessarily knowing what he was planning.
The three men charged Friday are linked to varying degrees to these suspects.
The 31-year-old, born in Tunisia, is suspected of being an intermediary between the Albanian couple and Arefa, said a source close to the investigation. The 24-year-old, born in Albania and a cousin of Henaj, is suspected of being implicated in a transaction over a Kalashnikov.
The Islamic State group moved quickly after the attack to claim Bouhlel as one of its followers.
Nearly six months after the Nice attack, investigators are still trying to understand the killer's real motives.
“There is a combination of (Islamist) radicalisation, a fascination for extreme violence and a background of psychological problems,” said a source close to the case.
Separately, an anti-terrorist judge charged a woman as part of a probe into a gang of female jihadists arrested after the discovery of gas cylinders packed in a car in Paris in September, said a judicial source Saturday.
The 23-year-old, arrested Tuesday in Mantes-la Jolie west of Paris, was charged Friday in connection with the alleged plot, foiled after the potentially deadly car was left near Paris's Notre Dame Cathedral on September 4.