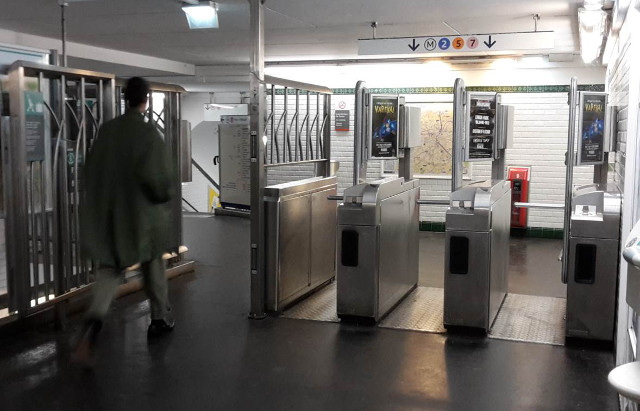 Photo: Charlotte Mason
The pollution levels are so high in Paris that public transport is free and only cars with even-numbered registration plates are allowed on the road.
The roads on Saturday will be reserved for those with odd-numbered plates.
But many Parisians in the 19th arrondissement told The Local that they don't think the measures go far enough to combat what is becoming a regular problem.
“Restricting cars with odd or even number plates is just camouflaging the problem,” newspaper seller Kamal told The Local.
“The real problem isn't people like you and me, it's politicians dumping waste and cutting down forests. We need more green spaces in Paris and more electric cars.”
“We should stop making petrol and diesel cars altogether.”

All barriers are open on the Paris public transport system due to heavy pollution. *cough cough cough* pic.twitter.com/7eXsuDhlCE

Some Parisians thought greener public transport was the solution.
“The real problem is diesel cars and lack of public transport,” said a designer named Clément.
“I'm more worried about the environmental impact than the health side effects. Paris always responds strangely to pollution peaks.”

But it's apparently not just authorities who react “strangely”. Thousands of motorists have been flouting the driving bans, apparently content to pay the €22 fine.
Police handed out over 1,700 fines on the first day of the travel restrictions alone.
“I wasn't going to buy another vehicle to go to work today,” 31-year-old builder Jug told the AFP news agency while he waited in his truck to pay a fine.
Some Parisians have shared their concerns about how the increase in the tiny airborne particles known as PM10 are affecting people's health.
“There definitely must be a long-term health impact,” financial analyst Matthieu told The Local on Friday.
“I think bikes and more ecological public transport would help the problem a lot.”
As the smog remains thick, many have taken to social media to express their frustration.
One tweeted (below): “Paris – shitty city with its shitty traffic jams, shitty drivers and shitty pollution!”

Others were irritated that the overflowing public transport meant they missed out on other things.

Pollution in #Paris is at record high levels again so free public transport. Meaning it's so busy I can't actually get on and get to work…

Some, meanwhile, were decidedly happy about the fact that they didn't have to pay for a ticket, including the Tweeter below who was thrilled to save €7.

And while the short-term savings may bring a smile to some faces, Friday is not the last Parisians will see of the smog.
Indeed, experts have already predicted that it will get worse on Saturday.
All this comes after a four-days of heavy pollution last week, complete with free transport and traffic restrictions. Several people who'd been left hospitalized from breathing the bad air even went as far as trying to sue the city.
The surge in pollution has been driven by cold, dry weather and near windless conditions that have trapped exhaust fumes, smoke from wood fires and other industrial pollutants.
By Charlotte Mason