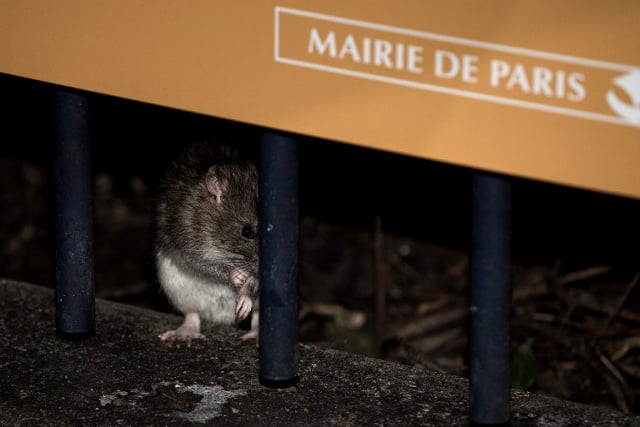 The Champs de Mars park around the famous monument is a battleground in a city-wide anti-rodent campaign that has drawn both cheers and jeers.

Several of the French capital's green spaces are off-limits for two weeks as rat catchers go about a grim task, baiting traps with powerful poison.

Many Paris residents were keen to see the end of a new scourge in a city whose image has already suffered from a string of terror attacks.

“It's about time,” one Paris native said. “In all my 40 years I've never seen rats in the daytime,” said the dancer, giving her stage name Fabiola H.

“They used to hide, but now we see them in broad daylight… obviously well fed.”

Safely out of sight, they were blissfully out of mind, except in the imaginations that created the hit 2007 cartoon “Ratatouille”, which depicted a Parisian rat cooking in a famous restaurant.

But the city has come under fire for allegedly dragging its feet before launching what has been dubbed its “war on rats”.

The campaign is seen by some critics as rodent mass murder — an online petition entitled “Stop the rat genocide” has gathered 19,000 signatures – and others fault the city for failing to keep the streets clean.

Georges Salines, head of Paris's environmental health services, is at the centre of the storm.

“When it's an emergency… we have to carry out operations to destroy the rats, which satisfies no-one,” Salines told AFP in his office adorned with pictures of flora and fauna.

“Animal lovers don't like it, nor do I because I love animals too,” he said. “Rats multiply very, very fast,” the public health doctor said. “As long as they have food, water and places to burrow, they'll multiply.”

Biologists say a female rat will normally have three litters totalling around 20 offspring in her one-year lifespan. Mathematically, one pair of rats could have more than 46,000 offspring in 24 months.

Salines hit back at the animal rights activist behind the petition, Josette Benchetrit, who labelled him the “killer in chief”.

“New in the Parisian cityscape: filthy streets because of the total and persistent disarray in the cleaning services,” wrote author and politician Serge Federbusch.

Describing the situation as “Hidalchaos”, he accused the eco-friendly Hidalgo of dragging her feet before “closing several green spaces long enough to kill the beasts!”

“Where there are rats, there's rubbish, and therefore sloppy standards. Big cities like Paris should not have too many rats, they are supposed to have the means” to prevent such a thing.

Salines said the problem was the sheer abundance of tasty morsels in Paris. “Rats have to be hungry” to go in the traps, he said.

That is why parks are being closed for the extermination effort. “If we leave them open there are too many people who bring in food,” Salines said.

The bait in the city's traps is “less appetizing than the food the rats find in the garbage”, Falgayrac said, warning that rodents that do not eat the full dose will survive to develop a resistance to the poison.

One relatively new source of food for the rodents is the city's open-ribbed rubbish bins lined with flimsy plastic bags, designed to avert terror attacks by making it harder to hide explosives in them.

Salines said the city was working to “develop new models of trash bins that are see-through to respond to terrorism prevention concerns but that are also inaccessible to rats.”

But the worst offenders, Salines said, are “compulsive” pigeon feeders who feed the birds despite the risk of being fined.

“There are people who give bread to homeless people and pay them to feed the pigeons,” he said, adding that they crowdfund to pay off any fines. “There are groups that support this kind of thing.”